I bet at least one of these will work its way into your conversation.  If you're hungry for more fun facts,  find them at Guinness Book of Records' official site.

3) Most successful movie ever produced in Canada: Resident Evil: Afterlife (2010)

5) First female to star in her own comic book: Sheena, Queen of the Jungle in 1937 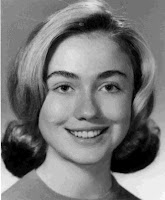 6) Longest running quiz show: It's Academic, where different high school students compete, has been on continuously since 1961. High school senior Hillary Rodham (shown) was a member of the Maine South High School Team that appeared in 1965. NOTE: After graduation from high school, college and law school, Hillary Rodham went on to marry Bill Clinton.

7) Oldest salsa dancer: Sarah Paddy Jones won first prize in a Spanish dance competition in 2009 when she was 75 years old

10) Shortest movie stuntman: Kiran Shah, shown here, is 4'7" and worked on the Lord of the Rings trilogy. NOTE: As a stunt man, Mr. Shah didn't play a specific role. He performed stunts on behalf of many of the actors in the LOTR.

11) Youngest performer to win an Oscar: Tatum O'Neal was 10 when she accepted the award for Paper Moon in 1974

12) Most television programs watched live by a single audience member: Italy's Alessandro Cocco has been the audience of more than 27,000 TV shows

13) Oldest Ruling English Monarch: The current Queen Elizabeth is 86. She beats her grandmother, Queen Victoria, who passed away at age 81.