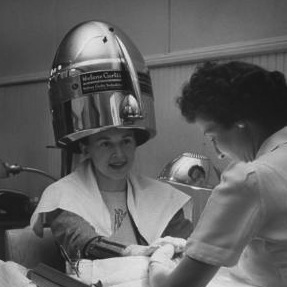 Yesterday I spent my late, lazy afternoon getting a manicure and pedicure and lip wax before the Groupon I bought months ago expired. The girl who did my nails was fine. But being in a salon is not being at a spa (where I was the last time I had my nails professionally done) and so even though my nails are pretty I was left feeling a little deja blue as I missed the Spa at Colonial Williamsburg or, even more, Chateau Elan. While I know a mani/pedi isn't one of life's essentials, this did feel more utilitarian than luxurious.

Then, the woman who waxed my lip was a pain. In the ass, not the lip. She was gentle enough. She was just an idiot. She should know that I cannot answer questions while she is tugging away at my upper lip. And the questions she asked were annoying. I have a mole on the right side of my upper lip.

"Has a dermatologist seen this?" Why yes, and thank you for making me feel like I have a deformity!

"Then why haven't you had it removed?" Because I don't want to, and again, thank you for making me feel like a have a deformity.

"When did you last wax?" I don't wax. Isn't there enough growth there for you to work with?

"No, there is. I just wanted to know when you last waxed." That would be never. I clip the stray hairs with manicure scissors.

"You must do it every day." No, I haven't done it since Sunday.

"Which Sunday?" The one that came before Monday.

All this in less than 10 minutes! It would probably would have only taken 5 if we didn't have to keep stopping for "conversation." While the aestheticians at Chateau Elan probably aren't technically much better than this, I bet they get much bigger tips BECAUSE THEY AREN'T ASSHOLES!

And today I had my hair cut and colored. I have known the guy who does it forever. Our families go way back. I know his siblings and parents, and he knows mine. And he gave me an earful about how difficult it's been, trying to help his elderly parents with their finances, and how little meaningful assistance he gets from his sibs. How worrisome it is to wonder how much to help without jeopardizing your own retirement plans. I know, buddy, I know! Plus, he has the added layer of stress that comes from not being able to help his wife's family to the extent he's been helping his own, and the tension that causes in his marriage because it's their money he's handing over. As I was leaving, he hugged me and told me it felt like therapy to get it all off his chest.


It was in the 90s today. Taking public transportation to and from the salon was exhausting because I FUCKING HATE HEAT! I got home and took a nap.


So much for my two "relaxing" days of beauty! My daydreams have me thinking that in 2013, I shall return to that destination spa outside Atlanta.