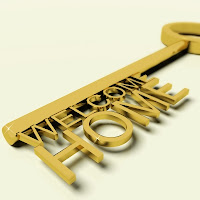 My mom was released from the hospital yesterday afternoon and I'm so grateful! She is going to be tired for a good long time, has to remember to drink -- preferably water -- almost constantly because she is at increased of dehydration, and she shouldn't be too far away from a bathroom for a while, but she's home. In her own bed. With her cat.

The house my mother currently lives in -- where I lived from ages 2 to 18 -- has only ever been owned by her family. Her mom and stepfather built it when she was in high school. It's the house she moved away from when she married my dad. When I was a toddler, she and my dad bought it from her parents, and that's where she's been ever since.

To me it's a ranch house with shag carpeting in the world's most boring suburb. But it's as important to my mom as Tara was to Scarlett O'Hara. So I'm so glad she's home!

Plus, I wasn't at all crazy about the hospital she was in. She and my kid sister love it because it's new and in a wealthy suburb -- where I was in an old hospital in a more working-class neighborhood when I had my surgery last September. Yet in my dumpy old hospital, I never saw food trays in the hall. Every hospital worker who came to visit me actually USED the hand sanitizer stuck to the wall. Glad she's home before she could come down with some sort of infection -- albeit a decidedly upper middle class infection.