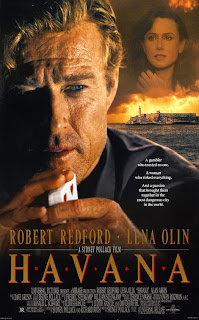 I'm watching one of Robert Redford's best performances in one of his least successful movies, Havana. He plays a gambler who has lost his glamor, a man who consistently sits with his back to the wall so he can always see who enters the room, a dissipated satyr who is attracted to ... no, make that familiar with ... no, make that comfortable in seedy sex clubs. His life is bereft of romance and aspiration. Until, of course, he meets her, the beautiful Swedish wife of a political activist in Cuba in those dangerous days just before Castro takes power. His love for her redeems him.

It's not a remake of Casablanca, exactly. More a reworking of it. When it was released in 1990, it was a bomb. Partly because Redford rather suddenly looked bad for his age (53). This lack of vanity was as bad for his fan base as it was good for the role. And because the very idea of a remake of a movie as beloved as Casablanca pissed people off. When I originally saw it, lo those many years ago, I was bored. But as I watch it tonight, I'm appreciating it very much.

As I appreciate all the movies in the Robert Redford/Sydney Pollack collaboration. They met as actors back in the 1950s, appearing together in Redford's debut, War Hunt. Sydney moved behind the camera, making popular movies like The Firm and Tootsie.

Eventually Redford moved successfully into directing, too, but not before making a series of movies with Pollack that helped define his superstar persona.

Funny how the last two films they made together turned out. Out of Africa may have won Pollack his only Oscar, but it's by far Redford's worst performance ever. Havana performed woefully at the box office, but in Jack Weil, Redford created his most daring character.

I learned from the recent Redford bio that Out of Africa and Havana represent the low point in their friendship, that Redford's success as a director spoiled the delicate balance of their collaboration. It worked when Sydney was a director who was only a modest success as an actor and became strained when Redford became an actor who won an Oscar as director. Was Sydney jealous? Yes. Was Redford competitive? Most certainly. They never worked together again after the commercial failure of this film, and drifted apart as friends. This makes me sad because in 1993, they both faced family crises and could have been there for one another (Redford's son Jamie had a liver transplant, Pollack's son Steven died in a plane crash).

They did reconcile at the very end of Pollack's life, and in 2008 Redford delivered his eulogy. George Clooney, Dustin Hoffman, Harrison Ford and the other superstars Sydney had worked with more recently were there, but when it came time to reflect upon Pollack's career -- both at the service and in the Time magazine obituary -- it was Redford. As it should have been.

PS On a far more shallow note -- Watching Redford ca 1990 makes me suspect he's had his eyes done. I saw him on TV a lot earlier this year promoting The Conspirator and he looked not so much better as different 20 years ago. For what it's worth, Bob, you shoulda left well enough alone.
Posted by The Gal Herself at 10/02/2011 10:16:00 PM