As her world turns 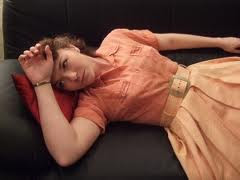 My oldest friend had surgery again last Monday. Her arm still isn't healing properly and, as part of her workman's comp agreement, she needs to this try to get her flexibility/agility back before she can return to work. It was outpatient surgery. It is hoped that she will be able to begin physical therapy on Tuesday.

She's upset because her kids are giving her so much grief again. Her son's violent temper has resurfaced, resulting in a broken bathroom vanity and a hole in the screen. This is bad not only because he's an asshole, but because she now rents, and every one of these tantrums means he's destroying someone else's property and costing her money she can't afford.

Her daughter, now a chain-smoking sophomore at Beverly Hills High, continues to flirt with drugs, alcohol and serial truancy. It's been recommended that she check into an on site treatment facility, where she would learn to control her impulses as well as continue with her studies. I don't know why there's even conversation about this -- the girl is still young, every possible step should be taken to get her on the right track. Her daughter resists this, of course, but so what? As my best friend says,"A parent's job is to parent."

My friend's move to California was a mistake. She feels adrift. Even before her workplace accident, this job wasn't working out. The cousin that she moved out there to be near actually lives in Mojave Desert, not Beverly Hills, and is neither as accessible nor as supportive as my friend needs. She's had a few dates out there, but not the romance or companionship she longs for. She hasn't made friends. I also think that leaving Chicagoland because she doesn't like snow and cold was just plain frivolous and stupid -- especially when you consider she drives everywhere and makes no mention of strolls up sunny Rodeo Drive or trips to the beach. Dumping her house when she did makes no economic sense.

But she made the move. And, to borrow from Col. Potter on M*A*S*H, "if you ain't where you are, you're no place." I believe she can decide to be happy there. After all, it IS Beverly Hills -- people travel from all over the world just to see it. And she wastes her days indoors, smoking in solitary or puffing away to deal with the tension of living with her son and daughter.

I have been telling her -- over and over again -- that she has to find some way to Beverly Hills her home. Join a church, call on her extended family. Go to the theater or TV show tapings. Move to a larger apartment (her 2BR, with her anxiety-ridden, anorexic 21-year-old son sleeping on the sofa, is simply too small).

But I fear she'll be moving back to Chicagoland soon. She conveniently forgets how unhappy she was here. (If I hear one more complaint about the snow and cold, I'll SCREAM!) She's not concerned about the negative impact yet another move will have on her daughter. She doesn't realize that the problem isn't her location, it's her life. But that's because she's hurting. And when she's hurting, her common sense seems to hydraulically shut down.

As the drama continues, I find myself less and less involved. I shall continue to be here every time she reaches out to me. I love her humor and imagination and I honor the decades upon decades of our friendship and our priceless shared history.

But I'm not counting on her to show up here, as promised, for my birthday next month. After all, I'm still waiting for my Christmas 2010 present and I haven't forgotten the agita caused by her "now you see me/now you don't" act after she offered to stay with me after surgery.

I understand that she is the best friend she can be to me, given her circumstances. While I can see clearly that they are circumstances she creates/perpetuates, she does not. She loves me and worries about me and depends on me and finds much about me to admire. That's valuable, and having her in my life makes me stronger.

My goal now is to simply appreciate our friendship for what it is and has been, and to quit trying to make her what I think she should be. I'm learning that if I let go a bit, not be as involved in her life and passionate about changing her (which isn't working anyway), I can still be a good and accepting friend.

And I'm saying a little prayer of thanks for all the resources I have that she doesn't -- faith in God, a network of people who love and support me, a career with solid professional contacts and good benefits, a resilient spirit … and the Cubs. I could never make the ill-advised decision to move that she did because NEXT YEAR COULD BE THE YEAR!
Posted by The Gal Herself at 10/02/2011 08:56:00 PM