And me without my headphones! 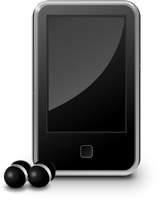 It was so hot today that, instead of sweating it out waiting at the train station and bus stop, I was going to cab it to and from my haircut. Well, as luck would have it, the timing worked out and making my connections home was easier than I anticipated so I was able to forgo the cabs and go with public transportation.

But since when I left in the morning, I anticipated going from cab to salon to cab, I didn't bring my iPod.

First on the bus I encountered a young man (maybe 3?) in a full-on tantrum. Twisting, screaming and stomping on his mother's foot, unsuccessfully trying to get her to release her grip on his arm. "Puppy!" I thought he was yelling. Only I'm wrong, because he soon began alternating "Puppy!" with "Mc-Don-ald's!" Clearly this determined young man was under the impression that a stop was going to be made at the golden arches, and his mother had, much to his chagrin, changed the itinerary. I admired his tenacity, but I did wish he'd just shut the fuck up. When he finally did, and his face became sunny, the bus pulled up to their stop and he was gone.

But no sooner had they departed than a grown woman, who should have known better, began shouting into her cell phone. "That's how she was to like to give William a heart attack!" I thought she was using "heart attack" as a synonym for "hissy fit." No, as she shared with all of us on the bus, William suffered real-live, honest-to-goodness cardiac arrest. Fortunately my stop came up before any more of William's sad tale was imparted into my barren-of-headphone ears.
Posted by The Gal Herself at 7/16/2011 07:11:00 PM