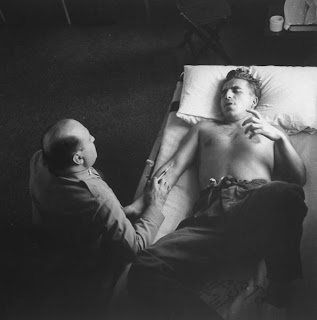 My oldest friend's very troubled 21-year-old son has been admitted into a mental health facility outside Los Angeles. I don't have the details of this specific incident, but I do know that he is a depressed, chain-smoking, pot-smoking asthmatic who has given up eating to such an extent that he has done damage to his heart muscle. He can literally sleep for days at a time and is given to rages that leave tables as kindling and put holes in walls and doors. I just hope that this time he didn't use his fists on his mother or sister.

He was in and out of two hospitals in 2008, but he managed to convince his mother that somehow everything would be all right. I hope this time she can be convinced to leave him in the hospital where he is. If he had cancer, she wouldn't believe him if he told her he could treat himself. Mental illness is just that -- an illness.
Posted by The Gal Herself at 6/11/2011 08:02:00 PM