I'm never prepared for the ending 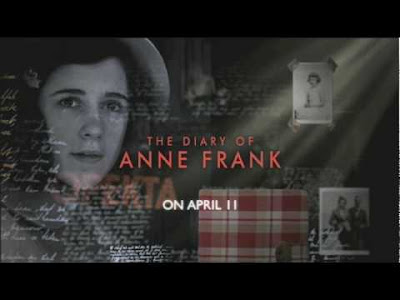 I just watched PBS's The Diary of Anne Frank. This production includes the material poor Otto Frank omitted from the diary for decades -- passages that touch upon Anne's burgeoning sexuality, her unforgiving appraisal of her mother and her parents' marriage, etc. I read the unabridged diary a few years ago so I wasn't surprised. In fact, the bitchier and bossier Anne (as played by Ellie Kendrick) seemed, the more she made me smile for she truly was, in many ways, a young girl just like the rest of us, dealing with hormones and periods and the issues of independence and growing up that we all dealt with. Only poor Anne never came through on the other side, never had the opportunity to look back at her adolescence with wonder at her own behavior.

Mr. Dussel, the dentist, is more sympathetic in this version than I recall him in the past. I think it's because I'm intensely private -- never more than when I was 13, 14, 15 -- and the very presence of him in Anne's room made me dislike him. So I don't know if it's his portrayal that has changed, or my perspective.

But the thing that never changes is what a shock the ending is. Anne writes, "In spite of everything, I still believe that people are really good at heart," and then the Nazis appear. The information flashed across the screen -- that Anne died in Bergen-Belsen the following March -- is just so freaking unfair! The hurt in my heart is that of the angry adolescent Gal who still simply cannot accept what happened to the young girl who poured her emotions into her diary … and whose words have been keeping us human for generations now.
Posted by The Gal Herself at 4/11/2010 09:54:00 PM