Cool! She finally speaks for herself. 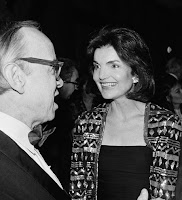 Post-assassination interviews with Jacqueline Kennedy to be unsealed

Just a few months after the assassination of President John F. Kennedy, his widow, Jacqueline Kennedy, sat down for a series of interviews about him.

Now, 50 years later, the public will find out what she said about her husband, his work, and life in the White House during an administration that was cut cruelly short. The interviews, strictly sealed after they were conducted, will be the basis of a new book slated for publication in September 2011, the John F. Kennedy Library Foundation announced today.

The seven interviews were conducted in the spring of 1964 by historian and Kennedy aide Arthur M. Schlesinger Jr. They were part of an oral history project that captured the memories of those close to the president, who was assassinated in Dallas in November 1963, the foundation said.

The interviews cover a wide range of topics, the foundation said, including Kennedy's early campaigns, the Cuban missile crisis, Mrs. Kennedy's evolving sense of herself and her role as first lady, family life in the White House, and the president's plans for a second term.

The book, to be published by Hyperion, will be edited and introduced by Caroline Kennedy, and the family plans to make both the interview transcripts and 6 1/2 hours of audio recordings available.

Jacqueline Kennedy "believed in my father, his vision for America, and in the art of politics. She felt it was important to share her knowledge and excitement with future generations. It is a privilege for me to honor the memory of my parents by making this unique history available," Caroline Kennedy, president of the foundation, said in a statement.