Something in the way he moves ... 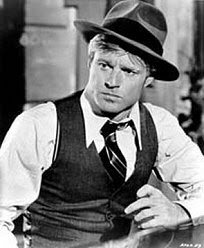 I'm enjoying my "stolen" day off with the two coolest guys in the world, Newman and Redford. It's still early in The Sting, Newman hasn't appeared yet, so I'm concentrating on Redford. It's not painful duty. Redford at age 37 is a very nearly perfect specimen.

His Johnny Hooker is immature, impatient, and wily. What I never noticed before is how well his movements -- walk, hand gestures, cocky jut of the jaw -- match the character. I think I have spent so much time enchanted by him as a movie star that I neglected to notice he's an actor.
Posted by The Gal Herself at 3/26/2010 12:43:00 PM