But I sooooooo want this! 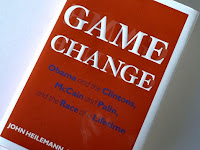 I made a 2010 resolution not to buy any more books. It made sense at the time, since I have a knee-high TBR pile. (That's literal, not an exaggeration.) But Game Change just sounds so damn fascinating. The Clinton marriage continues to keep me hypnotized. It would be nice to read an account of the Edwards marriage written by legit journalists. The Palin/McCain shotgun "marriage" of sorts sounds like a train wreck that needs to be chronicled. And maybe I can finally figure out what made Obama the Candidate so much more compelling than Obama the President.