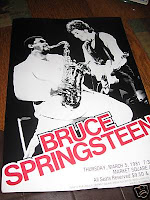 I mentioned this incident in a recent post about my most memorable moments, and several commenters asked me to elaborate. So here goes:

Back in 1981, Bruce Springsteen & the E Street Band kept criss-crossing the country, promoting The River. "Hungry Heart" was a hit and he was selling out progressively bigger halls. My friends and I had seen him in Chicago but we couldn't get close enough to the stage for our liking. So we scored good tickets for nearby Indianapolis (they were easier to get in a smaller market), rented a car, blew off work after lunch and hit the road.

We were in our work clothes when we arrived at Market Square Arena's "will call" window to pick up our tickets. Five girls in skirts and heels. As we were walking back to our car, we saw ... HIM. Broooooce! Riding in the passenger seat of a car, leaving the arena after the afternoon soundcheck. We all spontaneously raced after his car, completely unable to catch it (high heels and handbags). He laughed and waved.

Some roadies thought we were cute and asked us if we wanted to party with Bruce. Ah, yeah! They told us which hotel everyone connected with the tour was staying at, and told us to ask for "The Stanley Kowalski Suite." They'd meet us there.

Naturally after the concert we raced to the hotel. We found we couldn't get near "The Stanley Kowalski Suite" unless we had a roomkey. So we checked in and, armed with our roomkeys, wandered the halls until we found the party. When we got to the Security checkpoint we pretended to be affiliated with the tour, and Security pretended to believe us.

Once we were in .... Ah! The bathtub was filled with ice and bottles of champagne. There were platters of food everywhere. I got to meet Gary Tallent, Clarence Clemmons and ... BROOOOOCE! He was a little drunk and very happy. He told us he remembered us from the arena parking lot, "You were all dressed up like you just left a building or somethin'." I was flattered that we made an impression, but a little disappointed.

I mean, this was the man who wrote, "Show a little faith, there's magic in the night." I wanted to hear something poetic or profound!

I somehow found myself alone in conversation with him and he didn't disappoint. We talked about something that was still very much on both of our minds: John Lennon's murder just three months prior. I asked Bruce if he'd ever met John and he said no, but he was so thrilled that John had mentioned him in one of the last interviews. Bruce said he didn't know John was even aware of his existence, and to read that Lennon was a fan of "Hungry Heart" meant so much to him. He could tell that I was a still sad and shocked Beatle fan and patted my hand. "If it wasn't for John, we'd be somewhere different tonight, huh?" Meaning we both rocked tonight -- Bruce onstage, me in the audience -- because of John. It was very sweet, perceptive and true. Then Bruce got swept away by other, more raucous partygoers.

At the end of the night, he stood at the door like pastor at the end of church, thanking all the guests for coming to the party and for their contribution to the tour. He knew we didn't belong there, but he was very gracious. Very drunk and very gracious. Like a big brother he asked us if we got enough to eat and if we had a good time. I complained that here I had partied with world-famous rockers but hadn't done anything to regret.