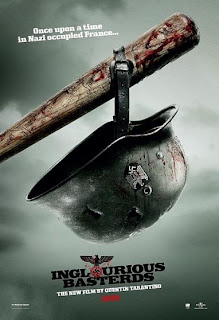 I'd call the Nazis "animals," but that would be unfair to animals. Their cruelty and viciousness is almost unfathomable. While it makes them very good screen villains, and easy targets, all these years later, we should be careful never to emulate them and cheer for atrocity against them. Atrocities are soul-numbing, regardless of who the victims are. That's what bothers me about Inglourious Basterds -- I feel as though I took leave of my humanity for two hours.
Posted by The Gal Herself at 8/23/2009 10:34:00 AM