The Bluest Eyes in Heaven 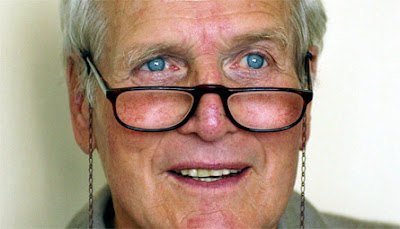 He was an electrifying film presence. If you haven't seen Butch Cassidy & the Sundance Kid or Cool Hand Luke, get yourself to Blockbuster right now! It was more than his movies that made him so cool, though …

He was married to the same woman for half a century, a woman who is pretty damn cool herself, Ms. Joanne Woodward. He used his fame for good, whether he was marching with Dr. King in Washington or raising hundreds of millions of dollars for charity with his Newman's Own products.

I live next door to recipients of his good works. In addition to providing sliding scale daycare for my community, the building next door is home to anywhere from a dozen to twenty kids who are waiting for placement in foster care. I didn't realize how often these children are separated from their siblings, but when this sad situation came to the attention of Paul Newman's foundation, a happy tradition began. Each summer, the kids next door and their siblings (whether already placed in foster homes or living in another communal children's home here in Chicagoland) spend the day together at a nearby amusement park, courtesy of Newman's Own.

Paul Newman touched so many hearts, with his movies, with his dedication to social causes, with those blue eyes. I'm grateful for film, so that in a way he'll always be with us.
Posted by The Gal Herself at 9/27/2008 09:29:00 AM