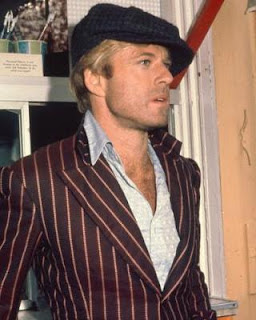 Today is Robert Redford's 71st birthday. I have no objectivity whatsoever about him. I've had a crush on this man since high school. I think it's nice that in addition to being yummy, he has a fully functioning brain and a fully formed social conscience. While he has never shied away from making "popcorn movies," he has also never been one of those actors who is afraid to let his beliefs inform his art or define his public persona. He seems to live by the tagline of his next movie, Lions for Lambs: "If you don't stand for something, you might fall for anything." Plus, he starred in the best baseball movie ever made, that metaphor for life, The Natural.

Yes, he's old now. But then, so am I. As a birthday tribute to the only fair-haired boy (celeb or otherwise) that I've ever seriously, achingly lusted after, here are some of my favorite lines from my favorite Redford movies:

"Luther said I could learn from you … I already know how to drink." The Sting.

"When I walked down the street people would've looked and they would've said there goes Roy Hobbs, the best there ever was in this game." The Natural.

"I'm Bob Woodward of The Washington Post." All the President's Men.

"Miss Starr, you were a missed person." This Property Is Condemned.