Will he EVER outgrow this? 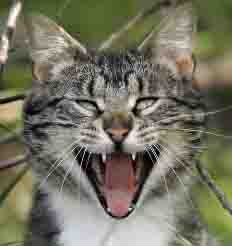 Our office closed early today. I came straight home, switched into my jammies and settled in with a glass of wine and prepared to watch The Family Stone on HBO. It seemed like a good way to start my long, quiet, relaxing holiday weekend.

He raced around, destroyed things, and cried for nearly two hours. Knocking papers off the table and spreading them about. Knocking a box of cereal from the top of the refrigerator and spilling Great Grains all over the floor. Stretching up to sharpen his claws on the framed artwork. Hanging from the drapes. Trying to liberate the cans from the recycling bag. All the while singing and announcing his hi jinks.

I tried cuddling him. He responded by eating my hair.

I tried tossing his favorite toys (colorful balls with bells inside) but he just sang as he watched me first throw and then retrieve them.

I emptied a big box, put it on its side and encouraged him to play cave. He meowed as he jumped on it once or twice, and then went on to amuse himself by knocking over a dining room chair.

The other two cats just look at him like he's insane. Which he is. While this two hour performance was a little extreme, he does a truncated version of this every night. I've had cats all my life and have never, ever had one this lively … mischievous … demonically possessed.

He was born in the spring of 2004, which makes him almost exactly 3 years old. He's not a kitten anymore. I can't count on this being a "phase." I've discussed this with the vet, who reassured me it isn't thyroid or metabolism, it's just Rey being Rey.

Now that he's done, he's curled like a little fur shrimp and is about to nap. I'm resisting the impulse to bend over and shout "MOW!" in his face.

It's taken me a while to bond with this cat because he is so very Reynaldo. But he is inexhaustibly patient with my nephew, gentle and playful with my other two cats, and open and affectionate with me, so I have slowly come to love him and would never get rid of him.

But if I end up joining friends for dinner or a movie this weekend, it will be in part because I can't take another two hour serenade from Rey.
Posted by The Gal Herself at 5/24/2007 08:23:00 PM