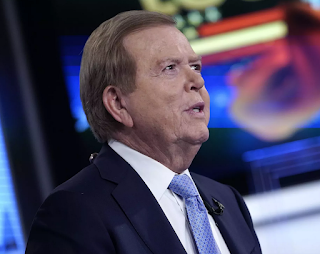 Howard Beale was the cinematic brainchild of Paddy Chayefsky, the Oscar winning screenwriter who who gave us Network in 1976. Chayefsky understood that somehow angry white middle-class white people* need an anchorman to scream for them. And so the phrase, "I'm mad as hell, and I'm not going to take it anymore!" was born.

Fast forward to 2021. Lou Dobbs has lost his gig at Fox Business because much of what he said on air cannot be substantiated. If it could, voting technology company Smartmatic wouldn't be suing Fox and Dobbs for $2.7 billion.

Clearly Fox understands that they have considerable exposure and are trying to distance themselves from the Dobbs "Stop the Steal" conspiracy theories that have been circulating since November. I get that.

And I get how angry white middle-class white people* might have found watching Dobbs rant cathartic.

But this is also obvious: little of what Dobbs said about election fraud can be verified. If it could, he and Fox would be salivating, waiting for a show trial that would vindicate them and substantiate their claims that Donald J. Trump was robbed. Instead, Fox is all, "Lou Who?"

So what I don't get is why the loyal viewers Dobbs has been lying to are still clinging to him. He lied to them. Either he's deluded or he knowingly misled his viewers. But he broadcast untruths. Why the loyalty?

It's like my friend Kathy with Sen. Al Franken. She has long complained that he was run out of office without due process over innocent hijinks. I have always hated what he did. Do I think he was denied due process in the Senate? Probably. But I also believe he enjoyed grabbing the boobs and butts of women he didn't know, just because he could. I'm not going to defend him.

Sen. Al Franken betrayed me. Lou Dobbs betrayed his viewers. Why do we remain so infatuated by the men who do us wrong?

*I've been a middle-class white person all my life and grew up watching this phenomenon. My dad used to yell at the TV, complain about liberal bias and worship Archie Bunker as some kind of Queens oracle who understood how "they" (blacks, Jews, Hispanics, women ...) were trying to crowd him out. I learned from him. Instead of parking myself in a recliner and screaming to no one in particular, I write letters, raise money and work on campaigns. I am, on balance, happier than my dad and have fewer lines on my face because I don't feel powerless.