Why not believe this? 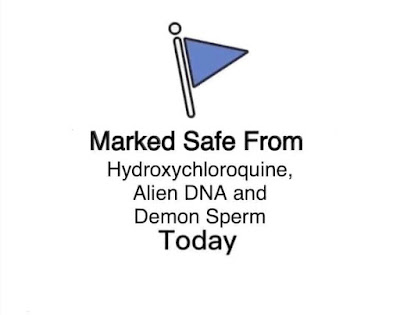 It's easy to laugh at Dr. Stella Immanuel, the Houston physician Donald Trump himself says has a voice that should be heard. She's a big fan of hydroxychloroquine, insists masks aren't necessary ... and says that alien DNA is used in medical treatments and that endometriosis is caused by women having dream sex with aliens.

But how is this any sillier than Q-Anon? You know, the folks who insist that Oprah Winfrey and Tom Hanks have been arrested for sex trafficking ... or that Dr. Fauci profits every time Remdesivir is prescribed ... or that Hillary Clinton and John Podesta run a child sex ring out of a pizza parlor ... or that Wayfair (the furniture website) is involved in sex trafficking ... or that the deep state is working to bring Donald Trump down. My favorite, of course, is that John Kennedy Jr. faked his own death to become the epoymonyous Q. At the right moment, he's going to reveal himself and support Donald Trump's re-election. Every good conspiracy theory should have a Kennedy tie-in.* John-John better get on the stick, since we're less than 100 days to the election.

I mean, really, are alien DNA and demon sperm any sillier than all that?