The perfect message for pay day 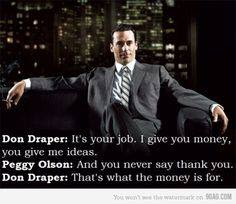 Sometimes I hate my job.

My boss has been an absentee landlord for the last few weeks. He bought a new house and the move didn't go as planned, so two days off turned into a whole week. So I got to do his work. A very complicated, six-page brochure.

Now he's back, but his head isn't in it. He's getting ready for an anniversary cruise and his wife lost her passport. He had to go to the Federal Building to get the replacement -- His wife can't do it? Is she Lucy Riccardo? -- and he likes to take the 4:30 train, and hell, he won't be here next week anyway, so I can just do that project, too. Why not?

It wouldn't bother me so much if the extra effort, and the extra stress, were acknowledged. But they're not.

That's what the money is for.