I find this touching 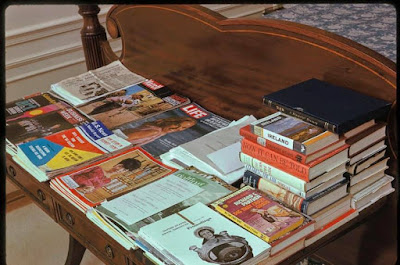 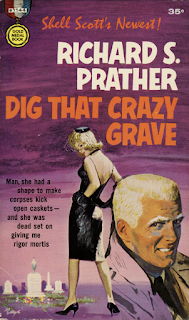 This is the table that was at the foot of President Kennedy's bed in The White House, September 1963. The man was a voracious reader. Of everything he could lay his hands on. He lived in a paper-based world, so I can only imagine how he would enjoy the internet. I imagine he would glory in having the world literally at his fingertips.

Many of the books are scholarly tomes, including some about Ireland. He'd just been there on a historic state visit, with a stop at his ancestral home, and apparently he simply wasn't done learning about The Emerald Isle. However, I can't help but notice the 35¢ paperback:  Dig That Crazy Grave. "Man, she had a shape to make corpses kick open caskets -- and she was dead set on giving me rigor mortis." It's still in print. Clearly he, like me, indulged in guilty pleasures. If my TBR wasn't so dauntingly high, I would read it. Just to feel closer to him.