Stay with me here. There's a twist. 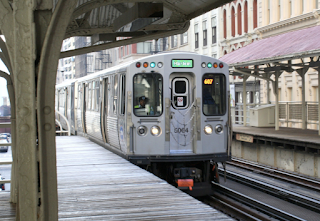 The Green Line el train gives me a valuable glimpse of the world every morning, taking me from Frank Lloyd Wrights and restored Victorians, through the impoverished neighborhoods, toward gentrification, over the River and into the Loop and then Michigan Avenue. It's very democratic, with every demographic represented.

Thursday morning, I ended up sitting with two men I never would have encountered, if not for the Green Line. They were older than most riders -- around 70. Their voices were raspy, probably from decades of cigars and cigarettes. They were both wearing bulky sweaters to protect them from the morning chill -- colorful, shawl-collared cardigans. They each were clutching paper bags, with only tell-tale twist tops peering out.

They were bemoaning the spate of carjackings on the west side of Chicago. They'd lived here their whole lives, and they've never seen anything like it.

"Pulling people out of a car. Who does that?"

"Boys! They got bodies of men but brains of boys!"

"Dumb and dangerous. Dangerous and dumb."

"Waving weapons for what? To steal a car? Who does that?"


"Never in your neighborhood! Who shits where they eat? Who does that?"

"Boys! They got bodies of men but brains of boys!"

I admit I was expecting a why-don't-they-get-jobs-or-stay-in-school kinda thing. Instead, these two charming old men were retired car thieves and chop shoppers, reminiscing about the good old days and, like the rest of us, complaining about Millennials in the workplace.