At the Moves -- Part Two

Last week I went to the TCM Classic Film Festival and had a freaking awesome time. A wallow for movie lovers, like me. It was about the camaraderie of meeting fellow buffs in line, of watching classics I love with others who love them, too, and on the BIG screen.

SATURDAY. I made my pilgrimage to The TCL IMAX Chinese Theater. It's the granddaddy of movie palaces, with more than 900 seats and the biggest screen I have ever seen. And it's steeped in Hollywood history. This is the theater that hosts the Oscars each year. This is the one with the iconic hand/footprints in its forecourt. 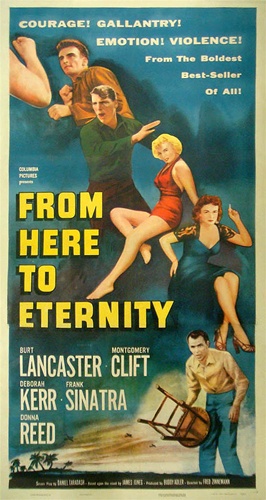 This is where I saw From Here to Eternity (1953). A grand black and white epic that is just literally awesome on the big screen. This movie is iconic for the oceanside clinch between Burt Lancaster and Deborah Kerr. But their love story isn't what grips me. It's the one between overly earnest Pvt. Robert E. Lee Prewitt and Lorene, the "hostess" at the New Congress Club.

Prewitt is a ridiculously handsome Montgomery Clift and Lorene is a decidedly unwholesome Donna Reed. She very nearly steals the picture with her Oscar-winning performance. But for Frank Sinatra, who also won an Oscar for his comic, heartbreaking supporting role as Maggio.

I sat behind two young (late teens? early 20s?) women who clearly knew nothing about the movie before it started. They were sitting alongisde their parents, who told them it was about soldiers stationed at Pearl Harbor in December, 1941 ("and you know what that means"), but beyond that, it was all new to them. One of the girls started to really cry when Maggio meets his unfortunate, inevitable end. I was jealous of them, experiencing this for the first time and in such a great theater. And I thought, "Good for you, Francis. You deserved that Oscar."

The movie was introduced by Donna Reed's daughter, Mary. She talked about her mother's role in this movie and, with great pride, about how Donna Reed supported the war effort in the 1940s. Hearing from her enhanced the movie. 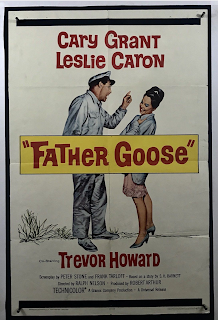 Then I went to the Chinese Multiplex for Father Goose (1964). This movie is not high art, but it's dear to me all the same. When I was a kid, I watched it on TV with my dad, and it made him laugh out loud. My father was not an especially happy man, and sharing this joy with him is an indelible memory.

It's one of Cary Grant's favorite films. He plays Walter Ecklund, a scruffy loner who loves his whisky and his boat. He ends up on a secluded South Seas island, watching for Japanese ships and reporting back to the British Navy. For reasons too complicated to go into, he suddenly has to share his primitive island with a straight-laced French school teacher and seven little girls. It's funny and silly and romantic.

It was delightful to watch it with a theater full of Baby Boomers who remember it as fondly as I do. It was introduced by three of the seven little girls, who are now all older than I am! 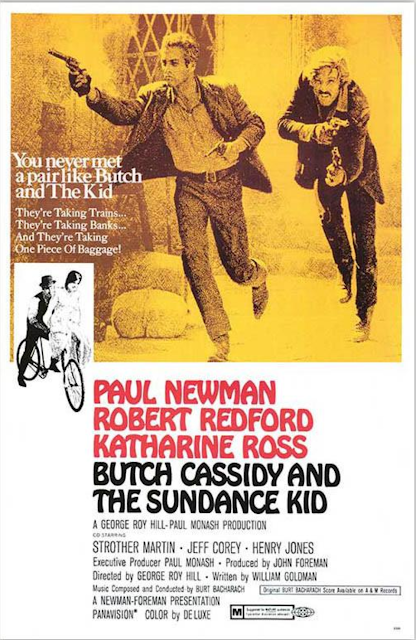 Back to the big screen for one of the highlights of TCM Film Festival: Butch Cassidy and the Sundance Kid (1969). Introduced by Burt Bacharach!

I Say a Little Prayer for You ... Alfie ... Do You Know the Way to San Jose ... Arthur's Theme (The Best that You Can Do) ... I'll Never Fall in Love Again ... This Guy's in Love with You ... He wrote 'em all. And, of course, Raindrops Keep Fallin' on My Head. What a thrill to see him and hear him talk about his work! He's 90 now, but he moves well and is sharp as a tack. And quite willing to let the chips fall where they may.

And then, of course, the movie! It was written by one of my all-time favorite authors, William Goldman. And then there are Newman and Redford, the two coolest guys to ever appear on screen. Period. They made me laugh, they kept me intrigued and exhilarated, and then, at the end, they broke my heart. And you haven't lived until you've seen those two glorious sets of blue eyes on that big, BIG screen!

My seatmate was TCM's Alicia Malone. She couldn't have been sweeter. At first I didn't want to bother her because she wasn't working this event, she was just there as a fan. But we talked about Leonardo diCaprio/Robert Redford and our cats. I missed Reynaldo so much and she missed her Fur Monster. We scrolled through our phones, sharing kitty pix like two crazy cat ladies.

I have so much more to post about this vacation, but I must back away from the keyboard for a moment.