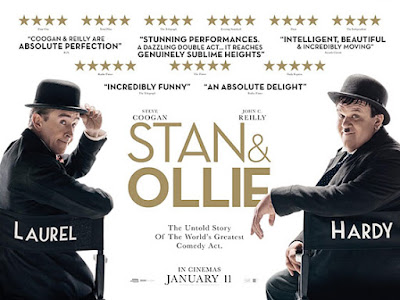 This weekend, I saw Stan and Ollie, and loved it! I'm only slightly aware of Laurel and Hardy. My oldest friend loved to watch their TV show* when we were little kids and would scratch her head and say, "I'm sorry, Ollie." But there, you now know everything about them that I knew when I put my butt in the seat.

But it's an enormously charming film, even for those of us who are not immersed in the pair's films. It takes place in the 1950s, long after their heyday. They are, frankly, broke and need work, so they go to England and do live shows. Hardy's health and their relationship have both been better.

I enjoyed seeing how seriously they took their craft. I appreciated how tender they were with their fans, especially the newly-minted young ones. At one point, Hardy loses his temper on a street corner and destroys a newspaper, shoving it in a trash can. Then he sees a group of schoolgirls witnessed his unseemly behavior. He immediately recovered, fiddled with his tie and conveyed to the kids that it was all a big joke, done for their benefit. Instead of being disillusioned, the girls were delighted.

Do yourself a favor and spend some time with Stan and Ollie. You will enjoy it, I promise.