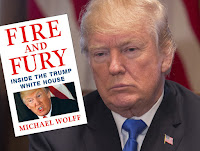 Let's suppose, for a moment, that everything President Trump says about this book is true. He's still full of shit.

We are, after all, talking about a man who -- for years! -- spread completely unfounded rumors about President Barack Obama.

•  Barack Obama was born in Kenya. Trump's "private investigators" went down to Hawaii to dig up dirt. At least that's what he told The Today Show and Meredith Viera in 2011. He's since said Obama was indeed born here and somehow all his birther-ing was Hillary Clinton's fault.

•  Barack Obama was a "terrible student" and didn't deserve to get into Harvard. Also in 2011, Trump made this claim to the AP. Of course, if Obama didn't really go, this is irrelevant. We knew more than six years ago this man spewed inconsistencies. Why would we doubt Mr. Wolff for saying it again now?

• Barack Obama had Trump's phones "wires tapped" in Trump Tower and is "bad (or sick.)" The kindest thing to be said about our current President's paranoid rant against his predecessor is that he's been unable to provide proof.

And this is just Barack Obama. Shall we discuss how Trump denied ever being rejected for a Florida casino gambling license during Jeb Bush's administration? Or spread the rumor that Ted Cruz' dad was involved int he JFK assassination?

If Donald Trump's kids haven't turned out to be exemplary citizens, I don't know that we can blame them when they had this sterling role model.

With all due respect, Mr. President, you need to get over yourself. And take a good, long look in the mirror before you throw stones at Michael Wolff.