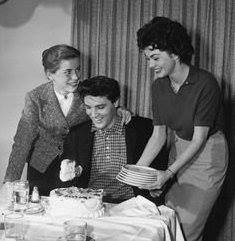 Today would be Elvis' 82nd birthday. Here he is celebrating his 23rd birthday during pre-production of King Creole. It is, in my humble opinion, not only his best movie, it's the last one he made before he went into the Army. Directed by Michael Curtiz (Casablanca) and with a top-quality supporting cast, it gives us a poignant peek into what his film career could have been if it hadn't been interrupted by the draft ... and then derailed by the combined evils of Col. Tom Parker's/Hal Wallis' greed and lack of faith in his ability.

One of the most tantalizing "what might have been's" is how his life would have unfolded if Elvis hadn't become a slave to the drugs that seemed to sap his earlier ambition and undermined his ability to say "no" to the crappy post-Army movies they put him in.