The Lucy-Desi Blogathon: I Love Lucy in Palm Springs

Familiarity Breeds Hilarity. My favorite episode of I Love Lucy is from Season 4, "In Palm Springs." I enjoy all the hilarious "Hollywood" episodes, where most of the humor comes from Lucy's fan-girl overreaction to meeting superstars of the day, including Cornell Wilde, John Wayne, Harpo Marx and (my favorite) William Holden.

But this episode stands out because there's no slapstick or pratfalls here -- all the humor is rooted in real life. Much of it is tender, all of it is authentic, and that makes it very funny. The icing on this comedy cake is a very deft turn by Rock Hudson.

Tension arises from too much togetherness. Not only have the Riccardos and Mertzes been neighbors for years in New York, now they are spending too-too much time together in Hollywood. The little things that had always been easy to overlook have now become massive irritants.

It all starts with the four them, trapped indoors on a rainy Hollywood afternoon. Lucy reads an article in the paper and begins laughing aloud. The story is about a wife who becomes so irritated by years of her husband cracking his knuckles that she took a baseball bat to him. This begins a conversation about how each of the four has a noisy little habit that could drive a spouse to distraction.

The conversation turns from good-natured ribbing to out-and-out fighting. The Mertzes retreat to their own room to leave the Riccardos to battle in private, and to continue their argument. Finally, when the four of them reunite, Lucy shares a truth. The problems caused by their annoying habits has been exacerbated by all the time spent together in close quarters. It's agreed that two of them should getaway to Palm Springs.

But which two? Fred and Ricky or Ethel and Lucy? How to decide? They agree on a coin flip. "Heads we win, tails you lose," Lucy suggests. First Lucy and Ethel lose 2 out 3, then 3 out of 5, then 4 out of 7. Finally Ricky just agrees to let the girls go because he doesn't have the stamina to toss "233 out of 349."

The girls get to Palm Springs and find it's raining there, too. It rains, and rains, and rains. It hasn't rained this much in this desert resort community in 20 years. Stuck indoors together, Lucy and Ethel begin to irk one another. Lucy comes to the thunderbolt realization that she's irritable because she misses Ricky. "I can top that," Ethel counters, "I miss Fred." Their longing is as touching as it is amusing. 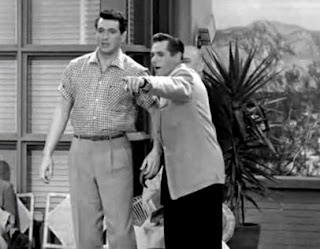 The clouds part and the girls race down to the pool. From a distance, it appears they're having a good time, but they're still sad and lonely without their men. Unbeknownst to them -- because it's I Love Lucy, after all -- Ricky and Fred have slipped into Palm Springs unannounced. Ricky persuades his new MGM buddy, Rock Hudson, to grease the skids and prepare the wives for a reconciliation with their husbands.

Rock Hudson joins the girls by the pool, telling them he has a message for Ricky. Naturally they are wowed to see him. At the time he was best known for lush, big-budget "women's pictures," like All That Heaven Allows, One Desire and Magnificent Obsession. A flabbergasted Ethel offers him a chocolate, asking, "Would you like a piece of Rock, Mr. Candy?"

Rock shares the news for Ricky. It's a ridiculous, completely made-up story about a woman he and Ricky both know from the studio, a script girl named Adele Sliff. Adele has just suffered a tragedy. She and Sam were married for decades, and over all those years Sam absent-mindedly, tunelessly whistled. Just one note. Over and over. Finally she could take it no more and filed for divorce. Once he was gone, she realized how much she loved him and wanted him back. Before they could reconcile, Sam died in a car crash.

(Hudson makes this so much more charming than it sounds in the retelling. I couldn't find a YouTube clip of this scene to share, but trust me, I have just done him a great disservice in the preceding paragraph. He had a gift for light comedy. I wonder if this turn on I Love Lucy gave producers the idea of casting him comedies like Pillow Talk at the end of the decade.)

The girls buy his sad story and start to cry. Just then, Ricky and Fred appear and the lovers are reunited. And we all live happily ever after! 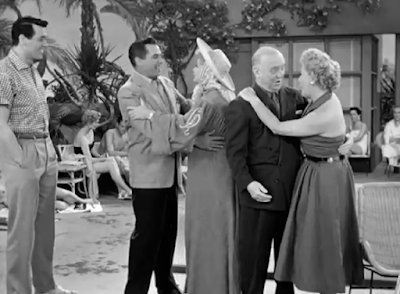 BTW, "Adele Sliff" was actually a script girl on I Love Lucy. 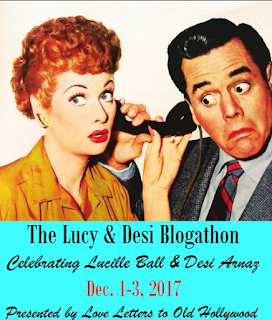