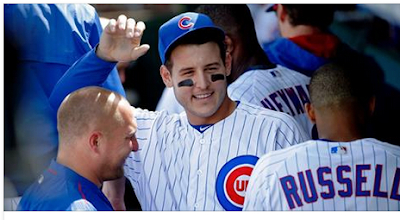 The Roberto Clemente Award goes to the major league baseball player who "best represents the game of baseball through extraordinary character, community involvement, philanthropy and positive contributions, both on and off the field."

This year, the winner is the Chicago Cubs first baseman (and my favorite) Anthony Rizzo.  Yes, he hit 32 home runs this year and made just 3 errors in nearly 160 games. But he's raised literally millions of dollars for pediatric cancer research. A cancer survivor himself, he regularly visits Lurie Children's Hospital here in Chicago, inspiring kids who are fighting the disease and supporting their parents. His foundation funded the new family waiting room at Lurie. When it became known that a little girl in St. Louis, battling brain cancer, lost the Rizzo picture she kept in her hospital room, he sent another ... and a signed jersey ... and tickets to Opening Day 2018 at Wrigley Field.  As if all this weren't enough to make him a stellar role model for kids ...

I've seen Anthony Rizzo apologize to an umpire for his attitude, cry on camera when emotion overtakes him, and even threaten to take on the entire Cincinnati dugout when their reliever beaned his teammates. On the field and off, this kid exhibits nothing but heart.

My friend John teases me that I act as though Rizz "sprang from my loins." I can only imagine how proud his mother must be of this son she raised.