Exploiting her to the end

I am deluged by the coverage of Hefner's death. I keep hearing about all he did for Chicago, where he got his start. How Playboy was one of the first magazines to publish Ray Bradbury and Alex Hailey. He championed balanced, long-format interviews.

He did all that while objectifying women.

He got his start publishing a nude of Marilyn Monroe. He built his empire on her body. He never paid her for that photo. I'm not implying that he did anything illegal. The starving young Marilyn signed a release for that red velvet nude. But still, she was objectified to a large audience, without her permission. Oh, and that release she signed? Her autograph says, "Mona Monroe." As she told a writer later, “I was nervous, embarrassed, even ashamed of what I had done, and I did not want my name to appear on that model release.”

Therefore I'm offended that he's going to be buried in the crypt beside hers.  So much for rest in peace. 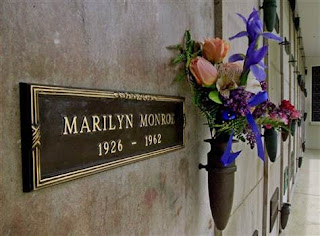