This Technicolor romance is the first Van Johnson movie I ever saw, and I saw it all the time. It seems the local TV stations could not show this romance enough. After school, while doing my homework ... after midnight, while babysitting ... Van Johnson/Charles Willis kept me company. Now it's frequently on cable, and whenever I happen on it, I stop to watch. I suspect these regular showings are because The Last Time I Saw Paris has been in the public domain for decades, not because of its quality or enduring popularity.

I don't care. I always enjoy it.

In a movie filled with Hollywood star power and European glamor, Van Johnson instantly feels familiar. He represents us, the average Americans.

Early in the film, his character, Charles Willis, is a correspondent for Stars and Stripes, reporting on World War II from his post in Paris. On VE Day, Paris erupts in joy and relief. Charles and his buddies are swept up in the excitement and the parties that have spilled onto the streets. An impulsive, beautiful girl takes a look at Charles, likes what she sees, and plants a celebratory kiss on him. Then she disappears into the crowd.

Charles and his roving band of Yankee soldiers and journalists move the party to a cafe, where he finds himself chatting amiably with an American named Marion (Donna Reed). Smart, sensible and pretty Marion likes Charles immediately and invites him home to meet her father and join her family for a more formal celebration.

He meets, and is charmed by, Marion's louche father (Walter Pidgeon), a WWI veteran who fell in love with Paris and never left. Charles also meets, and is mesmerized by, Marion's kid sister, Helen (Elizabeth Taylor). Turns out that Helen is the girl who kissed him in the street. The attraction between them is immediate and irresistible. They begin a romance, and Marion is left on the outside, looking in.

Helen and Charles begin their life together in post-war Paris. They marry, and her father moves in with them. Marion tries to move on and marries a staid, decent Parisian lawyer named Claude. Neither daughter has much money, but both seem happy (or in Marion's case, as happy as she can be, with her kid sister married to the man she really wants). Charles is a journalist by day and a novelist by night, and Claude is slowly moving up the ladder in the French justice system. Helen is still a wild child, but Charles finds her enchanting, and clearly enjoys his wife and their daughter, Vickie (Sandy Descher).

Those are my favorite scenes, the domestic ones between Charles and Vickie. There's a naturalness between father and daughter that adds poignancy to the plot as it unfolds. In fact, I find greater chemistry between Johnson and Descher than between Van and Liz.

Then our expatriates receive some surprising news from home. It seems that decades ago, Helen's and Marion's father came into possession of some "worthless" Texas oil leases. Suddenly those "worthless" leases are anything but, and as wells gush oil, our characters find themselves awash in cash.

At first, everything is delightful. Charles can quit his job at the newspaper and concentrate on his novels! Helen is convinced that he has the talent to write something that can be both a critical and financial success, if he sticks to it. The money raises Claude's and Marion's profile in Paris and Claude lands an important job as a prosecutor.

But as the bank balances go up, the guardrails come down. When Charles' manuscripts are rejected, he drinks ... a lot. (Why not? He no longer has a day job.) As her husband becomes moodier and more withdrawn, Helen amps up her party girl ways. (Why not? There's always someone to run her home, even when she's not there.)

And there are his-and-hers affairs. Charles takes up with a glamorous European widow (Eva Gabor) he once interviewed back when he had a job, and Helen allows herself to be seduced by a handsome British tennis player who has landed in Paris (an impossibly young Roger Moore in his first film role). These affairs feel strangely antiseptic -- perhaps because Charles and Helen are still in love with each other and are using these extramarital adventures to try to recapture supremacy in one another's lives. I shall end my synopsis here, to avoid spoiling the tragic ending of The Last Time I Saw Paris for anyone who hasn't seen it.

Instead I'll close with some film facts:

•  While today, The Last Time I Saw Paris is dismissed as soapy, at the time it was a prestige project. Taken from an F. Scott Fitzgerald short story and filmed on location in Paris and Monte Carlo, it boasted the current "hot" director (Richard Brooks) and wardrobe by Helen Rose.

•  Van Johnson took this role when Gregory Peck had conflicting commitments. I think that's all for the best. Charles tells much of this story in flashback, and therefore is with us almost every moment. Johnson had a lighter touch than Peck, and that made him very comfortable company over the movie's nearly two-hour running time.

•  It was Van's last role for MGM, and he went out with a bang. Not only was The Last Time I Saw Paris a success at the box office, it's one of the only two hits MGM had that year. (The other was The Long, Long Trailer.)

•  The Last Time I Saw Paris will be shown on August 31 as part of TCM's Summer Under the Stars Tribute to Elizabeth Taylor.


Want more Van Johnson?
Fortunately, there's a blogathon going on!
Check it out at Love Letters to Old Hollywood. 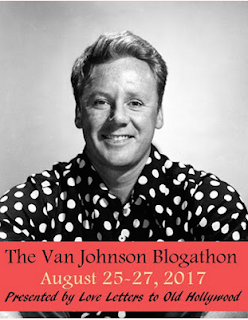