But now I know and I'm miserable about it

My condo building has been bedeviled by bedbugs since Memorial Day. I'm luckier than many of my neighbors. I was bitten, but it happened in the laundry room, or maybe one of the carpeted hallways, not in my actual home. This unit has been checked twice -- once visually, once by canines -- so I know I'm bug free.

It hasn't been all bad. No, really. Yes, it will cost us each about $1200, when all is said in done, to rid ourselves of the pests. Yes, I've been forced to haul my laundry to the washeteria every week, which is an expensive and time consuming pain in the ass. But the attendant inspections forced me to do much-needed housework and rid myself of some clutter.

Not everyone is faring as well as I am. At this week's condo association meeting, the exterminator took our questions and said one unit was having ongoing bug trouble. Unit 208. Flipping through his notes, the exterminator told us he was surprised the owner isn't the one who reported the problem because the infestation is so great. The mattress and box spring had to be disposed of, as did the sofa, which had so many bugs it "nearly moved."

Unit 208 has been treated twice -- first with heat and then with chemicals. In the vast majority of cases, bed bugs are eradicated by heat. Yet the bed bugs are reluctant to leave Unit 207. Seems the owner is cooperating with the exterminator, but only to an extent. There is still an issue of "clutter" in the unit, and the owner is reluctant or physically unable to fix this problem.

The owner of 208 is well-known to me. He's The Saddest Boy Ever. Now in his mid-40s, he spent many years caring for his debilitated mother, who died in 2012. The condo is paid for, but he still has to come up with the monthly assessments and property taxes. He works part-time at Macy's and probably makes less than $15,000/year. But he has health problems that prevent him from working full time.

And much of the "clutter" that's getting in the way of bug treatment belonged to his late mother. I was shocked to learn that he's been living with her "stuff" for four years. And now her clothes, etc., are infested.

The woman who lives across the hall in 207 is furious. A working mom, alone with her little boy, this condo is a major investment for her. Her young son has suffered bug bites. She wants this problem fixed, NOW! Her home has been treated twice, too, but the bugs are making their way across the hall. She put tape under door to catch them as evidence.

I understand her anger, I do. But the Saddest Boy's issues touch me deeply. Can you imagine living in an apartment overstuffed with your dead mother's stuff? It must be oppressive and depressing. And how horrible to see your mother's belongings taken over by creepy crawlers!

To make it worse, his unit has to be bug free by mid-August. The exterminator has been very liberal in how he interprets his warranty for service and promises to keep treating 208 as often as is feasible, at no extra cost to us, even though the treatments may not have been successful because of the Saddest Boy's lackluster cooperation. But it's a 60 day warranty, and come Day 61 he has to begin charging us again. He's running a business here, after all. 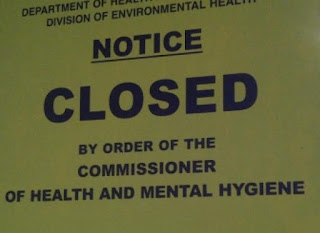 The Saddest Boy wasn't at the owner's meeting, so he didn't hear the conversation. He doesn't know that, if he doesn't up his performance, the Village might be called upon to intervene. He can be forced to dispose of his own furniture and belongings and have his carpeting removed because he poses a health hazard. He didn't hear that, after the warranty is up, there is talk of him having to pay for the treatments himself -- even though he can't afford them. And that would mean he'll lose his home.

After all, he has confessed to me that he has trouble making the $275/mo. assessments now. I don't know how he'll come up with the additional $1200 we now each owe on top of that. And, once the warranty is up, he'll be responsible for each treatment (up to $1000 a pop) that's required to kill the bugs.

This makes me beyond sad. I have toyed with offering to help The Saddest Boy go through his mother's stuff except:

2) Clearly there's some psychological pathology here. During my long and storied career as a slob, my messiness never reached these proportions. He must be experiencing bites! If the bugs weren't feeding on him, they wouldn't stay in the unit. So clearly, he's not cooperating because he can't. And I'm not equipped -- intellectually or emotionally -- to help him.

3) In the past he has expressed romantic interest in me, and I don't want to embarrass or mislead him.

But I'm miserable and I can't stop thinking about it. He's my neighbor and he's suffering.