Over the last few days I've given prescription medication more thought than I have in months.

Metronidazole. That's the antibiotic I'm taking for my C. Diff. I took my last pill yesterday and thought that Saturday morning would dawn and I'd be fine. Saturday dawned, but I still had diarrhea. This has been going on for more than a month and cannot be good for my body. I called my doctor's office, knowing my GP left for vacation on Friday, but confident someone there could refill my prescription. I was prepared, need be, to insist on talking to my gynecologist, who is part of the same practice. That wasn't necessary. My doctor had a lovely back-up physician, who called me back right away and not only called Walgreens for me, she also told me to take a probiotic and recommended I eat more, even though I'm not hungry. She said at this point, my body is no longer used to processing food and so I must eat something -- a small portion of something bland -- three or four times a day. Even if I'm not hungry (and I'm not).

She told me that C. Diff is powerful and hard to cure, so what I'm going through is not unusual. Next weekend, I should be able to return beef to my diet, but dairy could take another month. I have another appointment with my regular doctor on February 9. I hope I'll be able to cancel it because I'll be fine. But I know I must be prepared to keep it, just in case we have to try a different prescription medication. 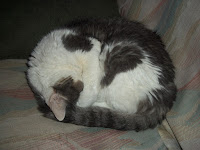 Benazaperil. This is what Joey gets squirted down his throat every day. It helps regulate his high blood pressure, which, in turn, helps preserve his sight. Each evening, when I dose him, I'm sad. For I know we are trying to save his vision just so that he's not frightened by blindness as his death approaches. There's no long term for my Joey. Since we don't know for sure how old Joey is, it's possible that his 21st birthday has come and gone. That's an exceptionally long ride for a cat and he and I have been lucky for the time given us. This bottle of Benazaperil will take us into March. I must be prepared that the bottle may last longer than Joey.

Prozac. My 16-year-old nephew took his first dose this week. I was surprised to learn that he's been suffering crippling bouts of anxiety and depression. I knew he was more comfortable in the cyber world than the real one, but I thought that was generational. He was massively disappointed in himself that he didn't make the honor roll, and was almost paralyzed with fear addressing the class about the subject of his choice (topic: why Citizens United needs to be overturned). This goes beyond a phobia of public speaking. He has a debilitating fear of failure. According to my sister, this began in summer 2012, between grade school and high school, and has just gotten worse and worse.

I am sorry he's suffering, but I'm proud of how open he is to treatment. Soon he will start talk therapy with a PhD, something I suspect will be more helpful to him than just a pill in his gullet. I know that some depression is biochemical and some is situational. I suspect that his is a combination. My kid sister can be a very unhappy person at times -- and she confessed to me that she's taken Wellbutrim and Prozac -- and you know what they say: "If Mama Ain't Happy, Ain't Nobody Happy." I don't mean that the my nephew's struggles are his mother's fault. Everyone is different, and everyone handles stress in his own way. And I applaud how pro-active my sister has been in getting help for her son. It's just that I know my nephew is sensitive and growing up in a moody, tense home may be as much of what's bothering him as personal body chemistry.

I asked my sister to tell him that I'd been in therapy for decades and took Lexapro for three years. She did, but I was not surprised that, when we had lunch today, he didn't want to talk about it. He was too enthusiastic about the book I gave him, Making of a President: 1968, and had a lot of Bernie Sanders/Hillary Clinton news he wanted to discuss. His passion for the Sanders campaign reminds me of the long-ago excitement that propelled Eugene McCarthy to national prominence. I don't think he's geeky. I want to hear how he feels about the campaign, and he wants to be heard. So perhaps that is role I am meant to play in his life.

I do wish religion had come up in my emails from my sister regarding his treatment. When I have been at my lowest, both as an adolescent and a woman, when I felt everything was hopeless and I had nothing to live for, I never seriously considered taking my own life because I knew God expected more from me. I have never doubted God's love. It is a powerful thing to cling to. I hope my nephew knows it is there for us all.