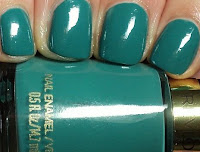 1) In this song, Chuck E.'s friends look for him at the pool hall and the drugstore. If we want to find you on a Saturday afternoon, where should we look? This weekend, I'm getting my holiday pedi. Revlon 590 Trendy. It's the first time I've moved out of the pink/red realm into teal. Time to broaden my horizons!

2) The lyrics tell us his friends know something up with Chuck E because he's even combed his hair. So here's a question about your hair: do you usually use a blow dryer or let it air dry? I blow it dry. It's pretty short now, so I don't need mousse. But in about a week or so, I'll have to call in reinforcements to control it. 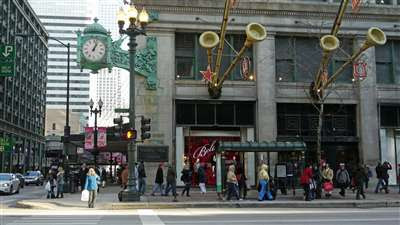 3) In this song, Ricki Lee sings that she spotted Chuck E. at the Pantages, a grand old Los Angeles theater. Nearly 100 years old, the Pantages was originally a movie palace and was renovated in the 1980s for concerts and theatrical productions. Tell us about a cool landmark in your town. Macy's on State Street is a National Historic Landmark. It was originally the Marshall Field's flagship store. Nine stories tall, it's been there since 1873. It's awesome. The Christmas windows are always adorable (this year's are devoted to Peanuts). There's a fountain in the lobby where I've tossed countless pennies making untold wishes. It's my favorite place to shop. And it means a lot to the city. That's why the protesters have targeted it so often these past few weeks.

4) "Chuck E." is a real person. Chuck E. Weiss is a blues musician and DJ who hung around with Ricki Lee and her boyfriend ... until he fell in love. Have you ever had a friendship fall by the wayside when one of you entered a romantic relationship? Not over romance or marriage. Babies have proven to the death knell of some friendships. Parents of wee ones just can't get together after work anymore.

5) Rickie Lee was once married to a French musician named Pascal Nabet-Meyer. Say something to us in French. Sont des mots qui vont tres bien ensemble. 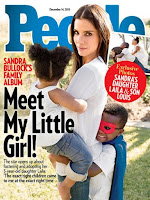 6) When her popularity was at its height, Rickie Lee appeared on the cover of Rolling Stone twice. Who have you seen on a recent magazine cover? Just read the PEOPLE cover story about Sandra Bullock and her new daughter. Aw ...

7) Rolling Stone called Rickie Lee "the duchess of cool." Who is the coolest person you know? Not Rickie Lee Jones. She looks so incredibly hygienically challenged, with her greasy hair and little brown cigs. YUK. Instead I'll vote for my friend John. He's hip. He marches to his own drummer. And while we've never discussed it, I'm certain he washes his hair more often than Rickie Lee Jones.

8)  1979 was a good year for Rickie Lee, what with her big hit record and the Rolling Stone covers. But it was a terrible year for The Who, because eleven of their fans died during an Ohio concert. What's your favorite Who song? I'm not really a Who fan, but I like "You Better, You Bet."

9) Rickie Lee moved to New Orleans, a city she fell in love with after a visit. Have you ever gone to a vacation spot and wished you could just stay there forever? Washington DC or Boston. I feel enormously comfortable in both places.