Wherever she is, she understands and forgives you 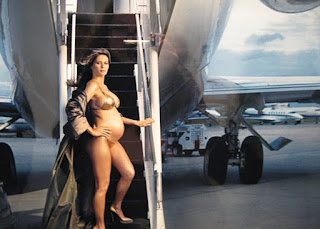 This old (2007?) photo is making its way around social media. Melania Trump is seven months pregnant, wearing a gold bikini and high heels, posing on the steps of husband Donald's jet. We can certainly wonder what this photo means about Trump and his attitude toward women, but that's not what this post is about.

Not that long ago, there was an uproar about Michelle Obama showing bare arms in her official White House portrait. In comparison, bare arms seem pretty tame, don't they?

I've learned that no First Lady gets good press in real time. It started when Martha Washington was slagged for the formality of her official dinners ("What? Does she think she's royal or something?") and hasn't let up since. 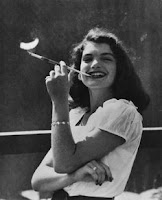 For example, the First Lady whom Melania Trump is said to aspire to be like, JBKO, was haunted by these two photos when she entered America's consciousness. The first is a shot of her at 16, trying to look like "a vamp" between sets on the tennis court. During the 1960 campaign, when this 1945 snapshot surfaced, there was an uproar over a teenager smoking. And her lifestyle! A young girl flaunting heavy lipstick, jewelry and a cigarette holder as she romps around Newport tennis courts? How decadent! There was a war on, after all!

This second one is of First Lady Jackie Kennedy vacationing -- without her husband (!) -- in Italy. Anyone with even a shallow understanding of the Kennedy marriage can imagine why she may wish to get away from the White House soon after her husband enjoyed being the subject of Marilyn Monroe's rendition of "Happy Birthday." However, back in 1962, whispers about the President's infidelities were limited to the Georgetown/New York/Hollywood elites. Ironically it was Jackie who was slammed for abandoning her husband and toddler son to go off to Italy on her own (though "on her own" meant accompanied her 5-year-old daughter, her sister and brother-in-law, and a pair of Secret Service agents). 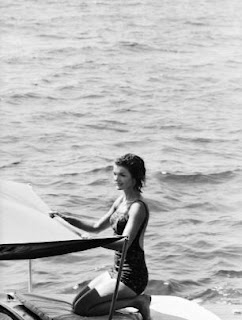 Photos like this one, showing her in a bathing suit, were splashed across front pages all over the world, and Americans were scandalized. Is this how a young wife and mother should behave?

After her husband's assassination, public sympathy swung overwhelmingly in Jackie's favor. But once she married Aristotle Onassis, the charges that she was spendthrift and decadent resurfaced. While no one blamed her for the nude sunbathing paparazzo shots that Larry Flynt published in Hustler, no one much felt sorry for her, either.

Now, decades after her death, JBKO is the First Lady today's candidates wives look to.* I think this would amuse her. Now that the pendulum has swung back, she's considered an icon of elegance and decorum again. I suspect she would say she was pretty much the same Jacqueline all along and it was the public's perception that changed.

*No word on who Bill Clinton's First Spouse role model is.