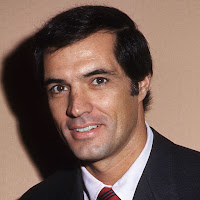 This is John Gavin. When I was a very little girl, I found him quite swoony. Not Little Joe Cartwright dreamy and certainly not Paul McCartney to die for, but swoony nevertheless. I didn't know what he did, really. He just appeared often on the daytime talkshows my mom watched between her soaps -- Art Linkletter's House Party and The Mike Douglas Show. When he came out to chat with the host, my first-grade heart went pitter pat. He always wore a tie with a bright white shirt that set off his bright white teeth, and his hair was just so perfect.

The only John Gavin movie I knew was Psycho. His part is really just a plot device and very little was required of him. I've read that Hitch thought him "wooden," but I never put much stock in that. After all, Hitchcock was dismissive of Paul Newman and Montgomery Clift, two actors who can break your heart with a glance and a line. 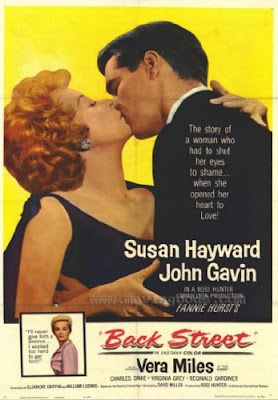 The other night, TCM broadcast Back Street. It's a lush Technicolor weeper where beautiful people wear gorgeous clothes and travel to exotic locales. The leading man is played by John Gavin! Finally my chance to see him in a major role.

He plays the heir to department store fortune, a man with a promising future and a high profile, and a drunk for a wife. Every time he tries to leave her, she tries to kill herself. He can't bring shame to his family, can't deprive his kids of their mother. So, when he falls desperately in love with Susan Hayward, they have to carry on their affair in the shadows.

Oh. My. God. He is awful. I know movies like this aren't high art, but with the right cast they can be fun. Rock Hudson would have been terrific, he owned these roles. I've also seen John Forsythe carry off such a part with panache. But John Gavin is unutterably bad. He's so low energy that, while watching his big death scene, I wondered whether the nurses would notice he had expired.

I kept falling asleep during Back Street. It took me three viewings to get all the way through it.

So what have we learned? Hitchcock was right, and we should never let first grade girls cast movies.