1) Singer Colbie Caillat says this song was inspired by a trip to "the beach and having a wonderful day with a person you like." Have you been to the beach yet this summer? No. I don't really enjoy baking in the sun.

2)  Are you careful about applying sunscreen? Not as careful as I should be.

3) Colbie made her TV debut in a 2009 episode of Saturday Night Live. Are you a big SNL fan? When both the show and I were young, I watched it religiously. But now I forget to put it on.

4) "Bubbly" is often a synonym for champagne. When's the last time you enjoyed a glass of bubbly? I don't remember exactly. It was probably a breakfast mimosa. Straight up champagne gives me a headache. 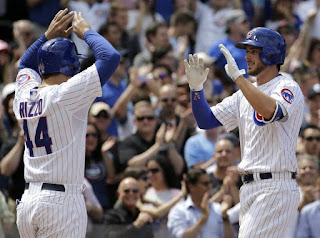 World Series in 2013. How is your favorite baseball team doing so far this season? OH, I'm so enjoying my Chicago Cubs this season! Loving the new manager (Joe Maddon), loving these two All Star sluggers on the corners (Rizzo and Bryant), loving our renovated park. It's all good.

6) In 2005, Ms. Caillat tried out for Season 4 of American Idol but was eliminated very early in the process, before she could even audition for Simon, Paula and Randy. The winner that year was Carrie Underwood. Are you a Carrie Underwood fan? Not really. But then, I'm more familiar with her eye shadow commercials than I am with her music.

7) In 2007, when "Bubbly" was popular, actress Yvonne deCarlo died. She was best known as Lily on The Munsters. If you had to choose (and yes, this Saturday you have to), would you rather hang out with Lily Munster or Morticia Addams? This is a tough one. While I definitely prefer Gomez to Herman, upon deeper reflection I must admit I like Lily better than Morticia.

8) In 2007, MySpace was faced with a serious challenge from Facebook, and it's obvious which social network won. Did you have a MySpace account? If so, do you still post to it? Never had a MySpace account.

9) Random question: Which have you had longer, your ironing board or your plunger? I can't recall purchasing either one. Though I know I paid $2.49 for the plunger at Woolworth's because the price display is painted on. (I just used it last night to unplug my shower drain.)