Here it is, Sunday night, and I'm watching Mad Men. I cannot begin to explain how much this show has come to mean to me. It's got the advertising business down so cold it gives me chills. And the fact that it's on Sunday, when I have to get up tomorrow morning and go through the lookingglass from Madison Avenue 1970 to New Millennium Michigan Avenue is oh-so fitting.

Tomorrow is going to be very weird. For The New Girl will be back in the office after a long, 4-day weekend. After a massive meltdown.

I won't go into detail. What brought her to the brink is too inside baseball for this blog and going over it again will just upset me. But just about everything I was so worried about occurring has. On Wednesday, when it all came to a head, she snapped at me twice and really tore into her staff, loudly complaining that their performance is "unacceptable" and that now the client is "way up her ass." The New Girl really shouldn't talk to people the way she did Wednesday, but that's just the tip of the iceberg.

The bigger problem is that nothing of consequence had been done on The Big Project (and all its ancillaries) since before I went on vacation on April 17th. I think the New Girl is overwhelmed and embarrassed by her inability to proceed, so she's lashing out.

She missed a big meeting on Thursday morning, a kick-off so that the creative team could finally start working, because a pipe at her mother's house burst.* She's only been in this job for a month. It made more sense for her mother -- who is healthy and has her wits about her (she works for a custom closet designer) -- to stay home and work with the contractor. Michelle knew we were all waiting for her, depending on her.

Then she took Friday off, a personal, "get out of town" day. She left word through her staff that she wouldn't be available, not by email/voicemail. After barely a month as a director for a major ad agency, with a client that's not only in the Fortune 500 but the Fortune 50, and she takes a personal day? She must be nuts. 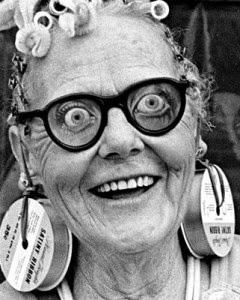 Now with my boss' permission I got the team working on The Big Project on Thursday morning. But The New Girl doesn't know that. As far as she knows, we lost two days that we couldn't afford to. This work has to be completed and in customer's homes in September. September isn't going to begin two weeks late because The New Girl fucked up.

What was she thinking?

I have to get my mind right for tomorrow. I have to act as though nothing is wrong, no matter how deeply I resent the way she first melted down and then bailed on us when she has responsibility to the client and project. I have to try to recapture the enthusiasm I had for working for her ... you know, before I knew she was crazy.

And, just to put it in perspective, she's still better than The Chocolate Covered Spider.

*She's living with her mother in a rather remote suburb. 40, broke and living again in her old bedroom in her widowed mother's house.