My oldest friend has been having a terrible time since she moved to California. She's had health problems, money problems, family problems ... and she has precious little support.

I've tried to convince her to make friends by joining a book club, a movie club, a church congregation ... all to no avail. She seems almost frightened by the prospect of making female friends, yet she's tried two different dating services in search of a boyfriend. It hasn't worked out. The first guy was an angry RWNJ who expected her to be sylphlike and consequently dumped her, the second wasn't her type at all and yet wanted to marry her because he was lonely and wanted a wife. These romantic failures made her sad.

A couple weeks ago, she met a younger man at work. He runs the janitorial service that maintains her office. She really enjoyed talking to him and sent me a couple of texts, referring to herself as a cougar. Then last night I got a flurry of emails about how they were having coffee that evening. She was so excited. Yet today I've heard nothing about it. 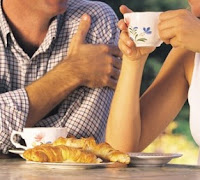 I hope it went well, but not in the way she expected. I hope he was warm and funny and that they have loads in common. I also hope he's gay. Because if he's everything she wants and needs in a friend, she'll have the companionship she longs for without having to endure a breakup.