I began this morning watching a special rerun of Meet the Press -- Dr. King appearing on that program on August 25, 1963 ... just days before the March on Washington and his "I Have a Dream" speech. I wasn't aware of how frightened the white establishment was, how many predicted violence, for the mall that day. But there it was. Newsmen were asking King and the NAACP's Roy Wilkins questions about violence right there, in real time.

One interviewer then even asked King if "Negroes" have been "pushing too hard and too fast."

Because the March is so often referred to as a great moment in American history, I don't ever consider how it was thought of before it happened. And Meet the Press was a sobering time capsule. 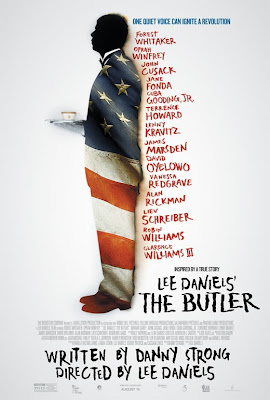 It was with that still ringing in my ears that I saw The Butler. It's the story of Cecil Gaines, a fictionalized black man who served in The White House as butler from the Eisenhower through Reagan administrations, and who got to meet President Barack Obama.

Therefore, it's the story of all of us. Unlike The Help, it's told exclusively from a black character's POV, and is more sophisticated about how it addresses race. Dr. King vs. Malcolm X ... an interesting observation about domestics as "subversive" rather than "subservient" ... and that pesky accusation about "Negros pushing too hard and too fast."

It left me tired, and weepy.

I was thinking of my mother. She was 70 years old when she voted for Barack Obama and was proud and moved by casting that ballot in ways she couldn't articulate and I didn't understand.

I was thinking of Trayvon Martin, and how young black men still have to be careful about living in the white world. And how today many white people still don't even want to acknowledge that this is true, much less talk about making it better.

I was thinking of that other 50-year anniversary coming up, of JFK's assassination. His real voice is one that's heard over the closing credits. It was his June 1963 address that framed civil rights as not a legal issue but a moral one. "Now the time has come for the Nation to fulfill its promise." (To be honest, I don't know if that sentence is actually heard on the soundtrack. I was on my way to the exit as soon as I heard his voice and recognized the speech. I don't like to cry in public so I had to get out of there.)

It was a dizzying mix of emotion. Disgust at our history and pride in how a movie like this could be made and literally applauded by a theater full of people. I mean, hey, Edward Snowden, a movie like this about and by Russians simply isn't possible.

So it's hard for me to think of this movie as just a movie. But the movie lover in me was able to make these observations: Yes, Oprah can act. She's in the movie a lot and after a while, she disappears into her character … Yes, that really is Mariah Carey at the beginning … The filmmakers should be applauded for their attention to detail: Jackie Kennedy is shown smoking and they got HR Haldeman's haircut right … LBJ still suffers, in movie terms, by following JFK. There are some cheap (accurate but unnecessary) observations about him that diminished him and I'm not sure belonged in the movie … Nancy Reagan should feel very good about the controversial casting of Jane Fonda.

So see it. Definitely see The Butler. But bring a tissue. The fact that we are willing to watch ourselves at our worst IS us at our best. So you'll leave the theater feeling patriotic.