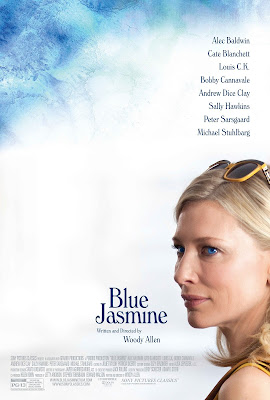 I saw Woody Allen's Blue Jasmine today. Just as the wonderful Match Point was Woody's take on A Place in the Sun, this is his crack at Streetcar Named Desire. I get it.

The script is smart. The editing and story construction are masterful. The acting -- especially Cate Blanchett and Alec Baldwin -- is impressive.

But I think Woody Allen hates all his characters. Even the "good characters" -- especially the kid sister played by Sally Hawkins -- are condescended to by the script and the direction. Her "dumpy" apartment is at least 2BR with a fireplace and an eat-in kitchen, and lots of artwork and books. The woman manages to afford this with waitress and grocery store jobs. And somehow we're supposed to pity her. I admired her.

Woody Allen is immensely talented. He's also no paragon of virtue -- there's a conversation between Blanchett and Baldwin toward the end of the movie that uncomfortably mirrors what we know of Woody Allen and Mia Farrow. And he's 77 years old. Maybe he's been cossetted in Manhattan too long, maybe he's too out of touch with the rest of us.

So while I understand the movie and was impressed by its strengths, I was turned off by how toxic it felt.