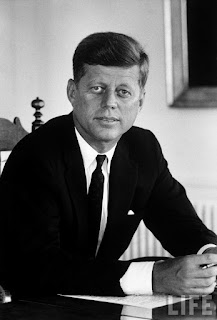 Today, John F. Kennedy would turn 95. It's hard to imagine him as an old man, since he'll forever be contemporary and 46. Though his life was not long, it has taught me a great deal. Not the least of which is ...

No matter how good someone's life looks from the outside, you have no idea how it feels from the inside.

To outward appearances, Kennedy lived a charmed life. His father was fabulously wealthy, he grew up surrounded by brothers and sisters who adored him, he was a Harvard graduate and a Navy war hero, a lion with the ladies who settled down with the woman who would become a glamorous superstar in her own right, to this day, the youngest man to be elected President.

The reality was quite different. His father, Ambassador Joseph P. Kennedy, was one of the most complicated men I've ever read about. Yes, he was a brilliant businessman and a loving, involved father. He was also a womanizer, an opportunist and (as Jacqueline would call her father-in-law in 1964), "the tiger mother" who believed that children needed to do punishingly hard work in order to be successful, because only success brings real satisfaction.

His mother, Rose, found herself in a nearly impossible marriage at a time when women -- even rich women -- had few options. So she retreated into piety and escaped to the fashion capitals of Europe. She had difficult, remote relationships with her oldest children, including the future President. To quote Jackie again, "His mother never loved him." And so he grew to become remote with women.

His favored and more conventional older brother overshadowed and bullied him. The sister nearest him in age, Rosemary, was "slow" and "special." Jack cared for and about her -- at socials, her dance card was always filled with the names of his friends who, at his suggestion, would pretend to compete for her attention. Imagine how he felt when, in 1941, he came home to find she no longer lived with the family. She'd undergone a disastrous lobotomy and was sent away to live at a convent. In the space of just four short years, his sister Kick, the one closest to him in spirit, lost their mother's affection when she married the titled but, alas, Protestant heir to the Duke of Devonshire, lost that husband in battle, and then lost her own life at the tender age of 28 in a plane crash.

Yes, he was awarded medals for his heroism on PT-109. The episode at sea also destroyed his never robust health. To support his shattered back he slept on a board and wore a corset under his clothes. (Did you ever wonder why, in Dallas, the first bullet that struck his windpipe didn't knock him down? His corset held him rigidly upright, making it easier for the assassin to make the kill shot.) He suffered from Addison's disease, low blood pressure, hypothyroidism and colitis. He grew accustomed to a life of pain, and he was so sickly that brother Bobby used to joke, "A mosquito bit Jack and died." 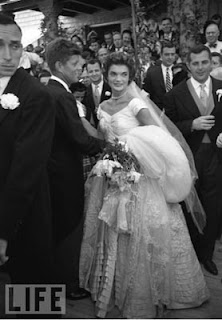 There is much, MUCH gossip about his marriage to Jackie but this much is fact: during their 10 year marriage she was pregnant five times, yet only two of their children survived to adulthood; her father died; his father suffered a massive, debilitating stroke. Doesn't sound like theirs was a charmed union, does it?

And yet John F. Kennedy prevailed. Overcame. Excelled. In his own way, and on his own terms. He is remembered for his brilliant mind, his wit and his vision.

He's always reminded me of the real Gatsby, the ultimate self-invented American man. I used to think he was gone too soon but now I'm not so sure. I think perhaps his lifestory ended the only way it could have.