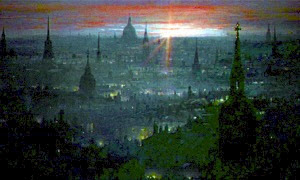 1) Sam is crazy for The Lion King. Do you have a favorite Disney movie? Mary Poppins. It was my first movie ever at the theater and it had a tremendous impact on me. I still remember the moment when the red curtains parted and I was transported to the rooftops of London. It began a lifelong love affair with going to the movies.

2) The song tells us that Hakuna Matata "means no worries." Is something worrying you right now? The same stuff that's been bothering me for the last six months -- mostly that I'll be laid off before I can pay the costs involved in settling my mother's estate. I will be so grateful when this is over.

3) Who is the most optimistic person you know? Usually me, but the last 18 months have been rough. I'll bounce back though!

4) Elton John wrote "Hakuna Matata" but didn't record it. Name a song Sir Elton is famous for singing. I don't know how famous it is, but this one is my favorite.


5) Can you play the piano? No, I'm tragically musically challenged.

6) Congratulations! You just won a guided African Safari Tour! 8 days in Zambia and Botswana for you and a friend. All expenses paid, and allowing you access to breathtaking, unforgettable sights. It takes at least 30 hours to get there, and before you go you'll need yellow fever and hepatitis vaccinations and medication to prevent malaria. Are you up for it? Not at all. Sounds like way too much stress for vacation. Can I get the cash value instead?

7) There's been a mistake. You really won a 4-night Disney Bahamas Cruise for two. Are you relieved or disappointed that you'll be partying with a guy in a Simba suit on the Lido Deck instead of observing a real lion in the wild? Relieved, I suppose. I know this makes me sound awfully ungrateful, but I don't know that I want to go on a cruise, either. Those cabins look awful tiny and restrictive to me. Can I get the cash value instead?

8) Let's bring this back to real life -- do you have any vacation plans? The Spa at Colonial Williamsburg in April. I cannot wait!

9) Describe your luggage. Is it durable and high quality? Or are you like Crazy Sam, who has been known to use an Old Navy shopping bag as her carry-on? I have very nice luggage. It's not new anymore, it's rather scuffed, but it's durable. Good luggage is a good investment!