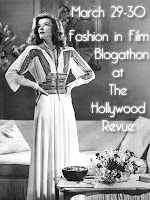 It's always fun to watch Hollywood look at itself. And no movie about movies is more fun than 1967's Valley of the Dolls. It's both cheap and expensive. It's high camp that takes itself very, very seriously. And it's a colorful time capsule of the swinging 60's most ostentatious hair, makeup and wardrobe. 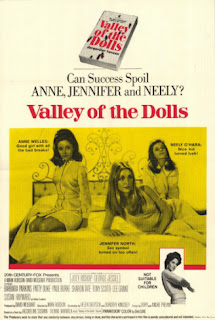 The clothes were done by Travilla. He was one of Marilyn Monroe's favorite designers, having dressed her in Gentlemen Prefer Blondes, Bus Stop and, most famously, The Seven Year Itch. Yes, he was responsible for that white dress, the one that blows up when Marilyn stands on the subway grate.

It's hard to believe now, but back in the mid-1960s, Valley of the Dolls was a high-profile, highly anticipated movie with a huge budget. So Travilla went into it knowing that money was no object. He would run into many, many problems working on this massive, messy movie, but finances were not among them.

A savvy veteran, Travilla understood his task -- to use his skills for character exposition. He once said of Valley of the Dolls, "... the very nature of the women is projected by that which they wear." 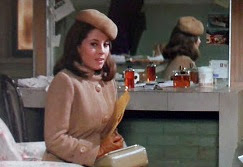 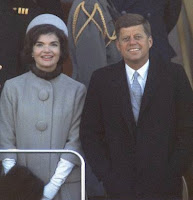 The first of the four major characters he dressed was Anne Welles, played by Barbara Parkins. He described Anne as a "shy, clean-cut American girl from New England ... I designed her clothes honestly, simply and attractively in the best of taste." In the 1960s, that woman, and those clothes, were exemplified by a certain First Lady. It's easy to see how Jackie influenced Anne's early style.

Once Anne's character becomes a glamorous city girl -- and improbably, a high-fashion model -- her style changes radically. Her hair, clothes and makeup are all very loud in the movies fabulous fashion montage. 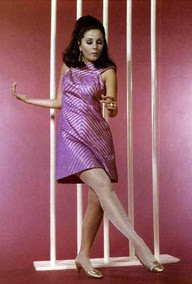 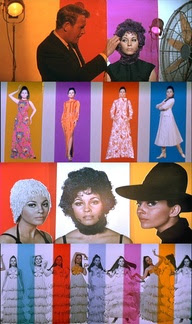 She's the Gillian Girl, the face of a cosmetics line and the idol of millions, but naturally that is not enough for her. She wants love and hot sex, as personified by (of all people) Paul Burke. (The key to enjoying Valley of the Dolls is to just let it wash over you, don't ask questions.) So she retires to domestic (albeit shockingly unwedded) bliss and her clothes get a bit more subdued, typified by pastels and sensible heels. But she's now living a jetset lifestyle -- New York to Malibu and back again -- and it shows in her obviously expensive wardrobe, complete with de rigueur mink. 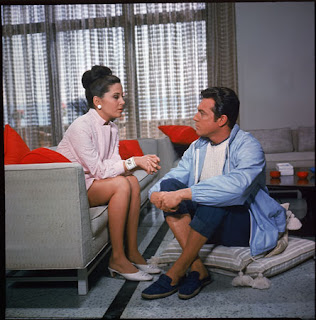 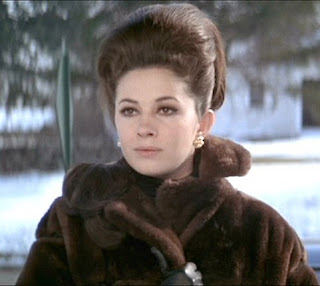 Then we have Jennifer North, as played by Sharon Tate. She was by far Travilla's favorite. He was effusive in his praise, describing her as "divine" and likening her to Monroe. "She has the same defenseless, childlike quality that Marilyn had." 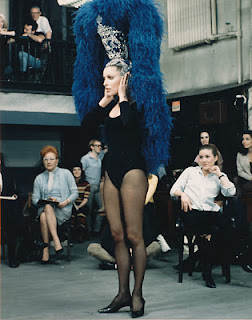 The first time we see Jennifer, she's in the chorus of a Broadway show. She descends a staircase wearing this awe-inspiring blue feathered creation and worries aloud that she may be "too top heavy." This comment, of course, makes her the topic of vulgar jokes. Jennifer is good-hearted, vulnerable and completely tragic -- a la Monroe and Mansfield.

Then she moves to Hollywood. Her clothes are beautiful but, just as Travilla intended, the style is still too flashy, still too revealing. 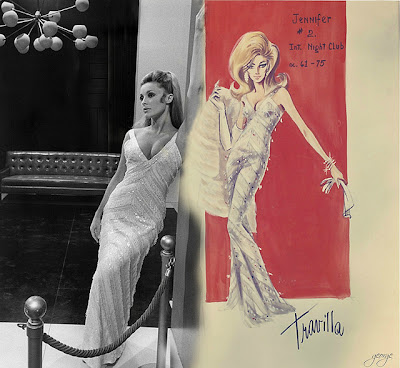 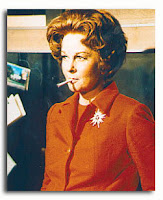 Next up: the redoubtable Helen Lawson. Travilla sums up the villain of the piece as personally "foul-mouthed and ruthless, completely without taste or finesse … She comes on like gangbusters -- like a scream." The first time we see Helen, as played by Susan Hayward, she's in her Broadway dressing room, swearing and smoking and terrorizing everyone who crosses her path while wearing a manish, tailored, "screaming red" suit. (I know this shot looks orangey but trust me, it's red in the film.)

Yet when the play opens, and we see Helen onstage (performing a ridiculous song surrounded by floating plastic pop-art), she's transformed into musical theater royalty. When Travilla gives her a gown in angelic white, he softens her onstage persona and helps us see why her loyal public still clamors to see every "Helen Lawson show." 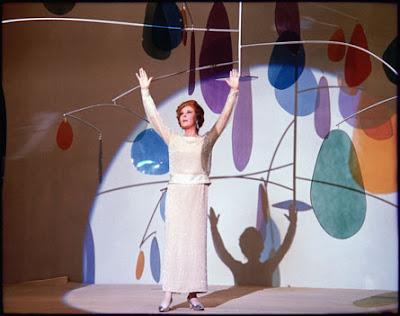 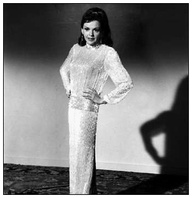 Legend has it Travilla thought this gown didn't fall quite right. All the outfits worn by Susan Hayward's Helen Lawson were originally designed for Judy Garland. Judy's Valley of the Dolls costume tests still exist, as do stills of her wearing the "screaming red" suit as she shot Helen's first scene. Garland was fired and Hayward brought in and there wasn't time to create all-new clothes. Instead they had to be hastily altered. Susan was taller and curvier than the short and by now quite gaunt Judy. If Hayward wore the oversized shoulder pads installed to make the tiny Garland look more formidable, she felt she looked like a linebacker. When Travilla removed them, he felt he ruined the silhouette. But the clock was ticking. Neither Travilla nor Hayward were completely pleased with what Helen wore. 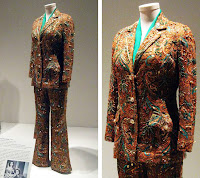 Except for The Suit. Garland walked off with it. Some say the studio gave it to her, to console a legendary star who had just been unceremoniously dumped. Others say she stole it out of spite, exacting a price from the producers who humiliated her. At any rate, The Suit had to be recreated from scratch for Susan Hayward.

Colorfully, intricately beaded, it was Travilla's favorite piece from Valley of the Dolls. Therefore it stands to reason to that he would want his favorite actress photographed wearing it. Here's Sharon Tate, playfully posing in the recreated costume. 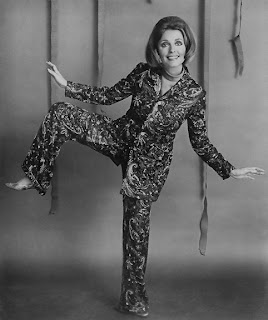 Here's how Helen Lawson looked in the second version of The Suit, the one made for expressly for her  and that she wore  as it appeared in the final film. And on the right is Garland wearing the original onstage, as she continued to do until her death two years later. Sharon has a mock turtle under the jacket, as opposed to the scarves worn by both Helens -- Hayward because the green scarf has to go from accessory to headwear in the famous catfight scene and Garland, presumably, out of personal preference. 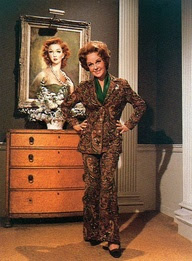 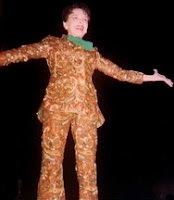 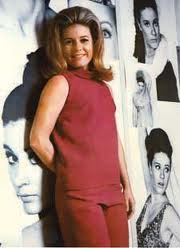 Finally there's my favorite, Neely O'Hara, as played by Patty Duke. Travilla describes Neely as his "ingenue ... perfectly natural and full of zip." A little girl with oversized talent and showbiz in her blood, Neely was obviously based on Garland (which naturally made the first few days of filming with Judy herself as Helen more than a little awkward). At the beginning of the movie, when Neely was scrapping and belting her way to the top, she dressed casually and simply.Young Neely's penchant for red may have been Travilla's fashion foreshadowing, letting us know that soon this talented little girl would be following in Helen Lawson's screaming-red-suited, "don't fuck with me" footsteps.

And sure enough, once she became famous, and her life became complicated by booze and pills and power and fame, her clothes became more complicated, too. Here she is in her white bouclé mini jacket/vinyl go-go boot glory for a movie premiere at the Dorothy Chandler Pavilion. 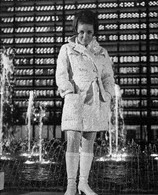 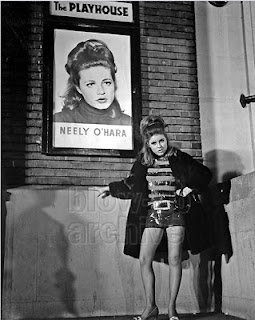 After a rather lurid stay in rehab, Neely returns to Broadway. Here our little egomaniac is, posing in front of her own poster. Again, Travilla's costume immediately conveys that our talented little sprite is no longer wholesome and now perhaps even dangerous. (Note that, like the real-life Garland in Summer Stock and A Star Is Born, Travilla often has Neely flashing leg.)

Patty Duke-as-Neely personifies everything that's hypnotic about Valley of the Dolls. She's over-the-top yet compulsively watchable. And she has all the great wardrobe malfunctions. There's a terrific scene where she crosses her legs with great flourish and the bow from the toe of her pump goes flying out of the shot. How can you not adore such a movie? And then there's this ...


Watch Neely's necklaces. These chains work overtime. At about 1:57, they literally lasso Patty Duke's breasts. And this is what I love about Valley of the Dolls. On the one hand, it's fastidiously designed couture. On the other hand, it's trashy dimestore necklaces that just won't behave.

Travilla won an Oscar for the Erroll Flynn swashbuckler, The Adventures of Don Juan, and an Emmy for dressing Linda Gray and Victoria Principal on Dallas. He may have preferred to be remembered for that, and for his work with Marilyn. But when I have the blues, I slip in my VOD DVD and find myself delighted anew by the camp classic and his contribution to it. 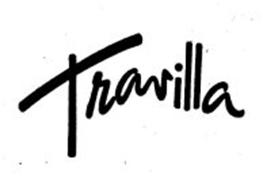 CHECK OUT OTHER FASHION IN FILM BLOGATHON ENTRIES.
Go to The Hollywood Revue for details.