was in the House 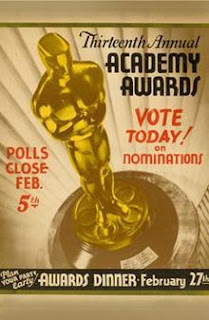 The 13th annual Academy Awards dinner was held on a Thursday night in late February, 1941 at Los Angeles' Biltmore Hotel. That year, the Best Actor nominees included four men who would become film immortals. The movies they were nominated for were major hits and remain popular today:


• Charlie Chaplin, The Great Dictator (his only acting nomination)

• Henry Fonda, The Grapes of Wrath

The fifth member of this auspicious group
is less well known,
and the movie he was honored for
isn't a cable staple,
but his role is unforgettable

Raymond Massey was born in Toronto and yet (like the UK's  Daniel Day Lewis) he was tapped to play our greatest President in Abe Lincoln in Illinois.

After distinguishing himself in World War I -- he was wounded while serving in France as a member the Canadian infantry -- Massey went home to Ontario. There he joined the family business, selling farm equipment. That may sound like a rural, Lincolnesque endeavor that kept him in contact with the land, but it wasn't. Massey-Harris was profitable and well established in both North America and England, and eventually it was purchased by AGCO.

Relocated in England for agribusiness, Massey discovered that had the soul of an artist, not a salesman, and was irresistibly drawn to the stage. His greatest London success came in the WWI drama The Silver Tassie. Massey felt a tremendous affinity for the material and eventually both appeared in and directed the West End production. In the 1930s, he moved to film, starring as Sherlock Holmes in The Speckled Band and playing the evil Chauvelin opposite Leslie Howard in The Scarlett Pimpernel.

Then he returned to the stage, starring in the Broadway production of Robert Sherwood's Pulitzer Prize winning play, Abe Lincoln in Illinois. Massey recreated his triumphant performance on screen, as well. Humble and honest, warm and wise, a voracious reader and charming storyteller, Massey creates an indelible portrait. In this homely, unpretentious man we see the all the makings of the legend. 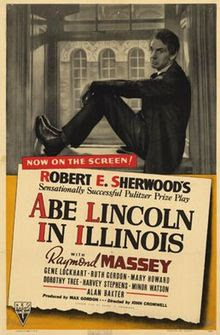 The movie begins with Lincoln on the Sangamon River, en route to New Orleans with a load of livestock. A mishap lands him literally at the feet of Ann Rutledge, the daughter of a New Salem tavern owner. He likes the town and really likes the girl, and decides this tiny Illinois town is where he'll put down roots.

The tentative Lincoln-Rutledge romance ends tragically, and his final declaration of love is one of Massey's most moving scenes. Whoever would have thought Abe could be this romantic? (I prefer to ignore that today's historians downplay the great man's relationship with Ann because their romance as depicted here is so touching.)

His New Salem neighbors prevail upon Lincoln to run for the State Assembly, which brings him to the capital in Springfield. The sets are very realistic. I have been to Springfield many times and recognize the windowseat in the poster from the law office Lincoln shared with Billy Herndon.

After his term ends, he begins studying law, and courting Mary Todd (Ruth Gordon, in her film debut). The wealthy, socially prominent Todds see this as a mismatch, but headstrong, ambitious Mary  sees unlimited potential in her beau and they wed despite her family's objections. With Mary's hand firmly in the small of his back, propelling him forward, Lincoln's star rises. Massey really sinks his teeth into the actual speeches of the Lincoln-Douglas debate. As the movie ends, President-elect Lincoln poignantly addresses the people of Springfield, saying he does "not know when, or whether ever" he shall return to his beloved Illinois. It's a moving moment, true to Lincoln's actual impromptu address at the depot, delivered beautifully by Massey.

This film leaves off near where Spielberg's begins. Four years have elapsed, his first term has just ended and the Lincoln now showing in theaters has just won re-election. Daniel Day Lewis' portrayal is wearier, cagier and tougher than Massey's. But that makes sense, for now he is a Commander in Chief who has been severely tested by the issues of slavery and war.

And the 1940 Best Actor Oscar went to ... James Stewart. I am a massive fan of Stewart's and love The Philadelphia Story, but it is undeniably the lightest of the five performances nominated that year.

While creatively this was his career high water mark, Raymond Massey went on to appear in more major Hollywood films, including Arsenic and Old Lace. He also rejoined the Canadian Army during World War II. He reprised the role of Lincoln several times -- in stage revivals of the Sherwood play, as well as on the big screen in How the West Was Won (1962) and the small screen in The Day Lincoln Was Shot (1956). Late in his career, he found great success with TV audiences as Dr. Gillespie, mentor to Dr. Kildare (Richard Chamberlain).

And here's a little gossip for you: Remember that Ruth Gordon was Mary to Massey's Abe? That gave her a ringside seat to Massey's rancorous divorce from actress Adrienne Allen, which took place shortly after filming Abe Lincoln in Illinois wrapped. Both Massey and Allen were represented by a lawyer named Whitney -- husband and wife attorneys on opposing sides of the case. After the Massey divorce was final, the Whitneys split, too. Adrienne married her attorney, William Whitney. Raymond wed his attorney, Dorothy Whitney, his wife until her death. This real-life tale so fascinated and amused Gordon that she and her husband, Garson Kanin, used it as the inspiration for their script, Adam's Rib.