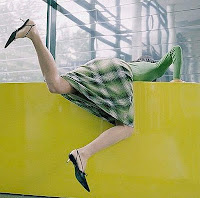 Almost a year ago I took a nasty spill that hurt both my pride and my knee. Last evening the same thing happened. The rain left the neighboring blacktop driveway so slick that I lost my footing and down I went. HARD! I landed on my hip and elbow. And even though I didn't hit my cranium on anything, I could hear the impact disturbingly loud inside my head.

There's a middle eastern couple who lives in that building. I see them all the time. They very kindly came to my rescue. However, they speak almost no English. I extended my arm, asking them to take the full canvas grocery bag that hung there so I could get up slowly, unfettered. He completely misunderstood and yanked me up by my arm rather roughly. She kept trying to wipe my pant leg clean. It's funny now. Last night it hurt. Still, they were trying to be kind and helpful and I appreciated it.

Hours and hours went by and I still had a headache. I was a little nauseous, too. Was it a concussion? Even watching Sir Paul on SNL didn't distract me!

I called my oldest friend -- she who has worked in doctors' offices for decades and has had every malady imaginable* herself -- and asked her what she thought I should do. We agreed I should give it till morning and then, if it's no better, go to the ER.

Then I got dressed and went to the ER anyway. It's up the street, after all, and I have insurance. Why not be safe? After two hours and a CT scan, I got a clean bill of health and was home. I woke up this morning and the headache is still there, but it's slight and I know it's nothing serious.

Being in the ER was humbling. I heard a baby crying so loudly and consistently I thought it was a doll. In the next cubicle (I was in #3) were two siblings and their elderly dad. He was dehydrated from fever and (I think) vomiting. The daughter was arguing rather petulantly with the doctor about how her father was being treated, while the son just wished his sister would let the doctor do her job. As I was being discharged I heard a man moaning and groaning rhythmically. I was very grateful to just have an owie. I slept wonderfully last night.