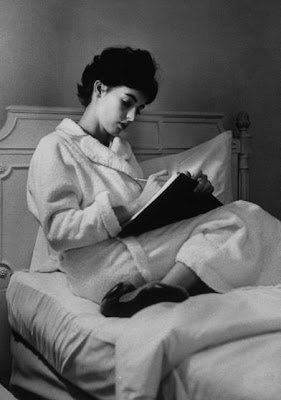 
Halloween had always been Sherri’s favorite day of the year – more even than her birthday. It wasn’t because of the candy, either. Halloween gave her a chance to indulge her dark fantasies. Instead of a Disney princess, Sherri trick or treated as The Bride of Frankenstein or shewolf (think “wolfgirl” instead of “wolfman.”) One year she and her best friend both dressed as cheerleaders, only Sherri was bruised, battered and bloodied – the tragic pom pom girl from Bloody White Line, the cautionary driver’s ed film.

Now, as a woman, she didn’t have a little black dress, she had a closet full. As the local country club’s photographer, she took sunny pictures of golf tournaments and tennis matches, but on her own time she photographed grave markers, tombstones and memorials that captured her fancy.

Sherri still lived for Halloween. This year she donned pantalets, a hoop skirt and period-perfect blouse, with a perfectly round bullet hole. She was Jennie Wade, the only civilian killed during Battle of Gettysburg in 1863. As she pinned her hair up, her head began to throb. Her muscles ached. The light above her makeup mirror suddenly hurt her eyes. Dammit! She couldn’t be coming down with the flu! Not on the most magic night of the year!

She promised herself she’d lie down for just a moment. The nap would rejuvenate her, she was sure.
She didn't awaken till the next morning, having missed her holiday altogether. She felt strong but filled with disappointment … and a curiously clear recollection of a vivid dream. A handsome, clean-shaven Union officer sat at her bedside, wiping her brow, lifting her head gently and carefully spooning Golden Elixir (a thick syrup containing alfalfa, willowbark, sage and brandy) between her lips.

Only it wasn't a dream. For as much as Sherri loved Death, he loved her, too. He tended to her and ensured she didn’t join him one moment before her appointed time.