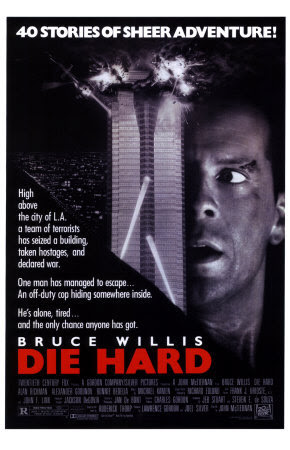 13 THINGS ABOUT THE MOVIE
DIE HARD

This TT is a golden goodie blast from the past -- a repeat of a 2008 valentine to one of my favorite movies. I have been writing about classic films a lot lately, and often the movies considered "the best" are ambitious, highbrow and inaccessible. Here's one that's entertaining, well made, and intended to be nothing more than a good time. It succeeds beautifully!

Author/screenwriter William Goldman famously said of the film business, “Nobody knows anything.” Much of this trivia and many of these factoids about Die Hard back that up ...

1. The original “coming soon” poster for Die Hard didn’t include Bruce Willis’ face. Executives at Fox were worried that the press he’d received recently might turn off moviegoers. These “problematic” news stories included …

2. The many high-profile feuds on the set of the Moonlighting, which was being shot during the day while Die Hard was filmed at night … and

3. The $5 million Bruce received for the movie, a damn near unheard-of salary nearly 25 years ago, especially for a TV actor who had no box office successes under his belt. There was much snickering and smirking (how appropriate where Bruce Willis is concerned) about no actor being worth that much and "who does he think he is" and Fox and Rupert Murdoch must be crazy. But …

4. The studio quickly realized what it had on its hands with Willis/McClane and switched to the poster you see here.

5. When a suspicious LA cop casts aspersions on McClane’s credentials, saying that for all anyone knows “he could be a bartender,” it’s a reference to Willis’ previous profession and the fuss about his Die Hard salary. One of the industry rags had a headline that ran something like, “$5 million & 5 years ago he was tending bar.”

6. Director John McTiernan had worked with Arnold Schwarzengger in the past and hoped Arnold would take the role of John McClane. Happily, Arnold turned it down.

7. Second choice Sylvester Stallone turned it down, too. Rumor has it Stallone thought that the McClane character had too much dialog. (In years to come, Arnold, Sly and Bruce would become partners in Planet Hollywood.)

8. So did third choice Burt Reynolds. Imagine McClane in a dirty, torn t-shirt and a toupee. Shudder!

9. So did fourth choice, Richard Gere – rumored to be a favorite of the studio but not the director.

10. McTiernan encouraged Bruce Willis to ad lib, and among his more memorable unscripted contributions are, (as he crawls through the vent) “Come out to the coast, we’ll get together, have a few laughs” and (as the firetrucks approach Nakatomi Tower) “Come to papa and I’ll kiss your effin’ dalmation.”

11. McClane’s signature line, “Yipee-ki-aye, MF,” was considered too intrinsically American for European audiences and before the movie was released in some countries, it was dubbed in as, “Here, eat this!”

12. All the action takes place overnight, rather than in the afternoon as originally written, because Bruce was working on Moonlighting during the day. Most of the film was shot on location in an actual LA skyscraper (Fox Plaza), and making the Christmas party an evening affair instead eliminated a lot of lighting problems.

13. Bruce Willis and Demi Moore were married in Las Vegas during the filming of Die Hard. Ashton Kutcher, then aged 10 and not yet able to cross the street by himself, was not in attendance.