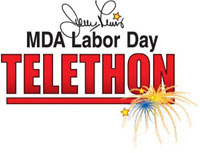 I luxuriated in the inanity of the Jerry Lewis MDA Telethon. I bathed in the plate spinners, the ventriloquists, the impersonators, the clowns ... the acts I only saw during the Jerry Lewis MDA Telethon. And then there was Jerry himself. Mr. Maudlin. Extolling the virtues of the perFORmers, practitioners of the business known as show. Always finding new and creative ways to offend.

This year there was no Jerry! I never even tuned in.

I know I'm in the minority, since MDA made more than $2 million more than it did last year, with Jerry, but I'm not contributing to MDA anymore. For while I enjoyed watching and making fun, I always paid for the privilege. No Jerry, no Gal.

Yes, he's an ass. But he also dedicated a half century to publicizing this cause and raising a ton of money for it. He deserved better than he got this year. He earned the right to sing, "You'll Never Walk Alone" to children who will never walk at all. And if I can't make fun of the tastelessness of that moment, my checkbook stays shut.
Posted by The Gal Herself at 9/05/2011 10:01:00 PM