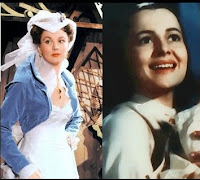 I have been watching Gone with the Wind when I can't sleep. I know it's considered an epic and a love story. But to me, it's a portrait of two very different kinds of great women.

Scarlett is tough and shrewd. Yes, she's selfish and spirited. But she faces her problems head-on and deals with them. It was Scarlett who defied the odds and managed to keep a roof over the head of her family and food on their table. If you have only seen the movie, her fixation with Ashley might confuse you. So pick up the book. As Margaret Mitchell describes him, he's more Robert Redford than Prince Charles.

Melanie isn't as tough or willful but she is strong. Her strength comes from decency and faith and a good heart. She knows Ashley better than he knows himself, understands him and loves him anyway. Likewise Scarlett. Melanie's not the deluded fool, she's just wise and chooses to see the good. When times are tough, she's the one -- never Ashley -- who is at Scarlett's side, making sure they prevail.

Part of why I think Rhett rocks is that he sees both of these women -- and Mammy and Belle Watling, too -- so clearly and appreciates each one's uniqueness and good qualities. I can see him living comfortably in the new millennium. But not even Rhett is as powerful as Melanie and Scarlett. Nothing keeps Scarlett down for long, and the only thing that can stop Melanie is death.

(I'd like to be more like Melanie, but in reality I've got a lot of Scarlett in me. I have a very bad temper and a stubborn, unrealistic view of relationships.)