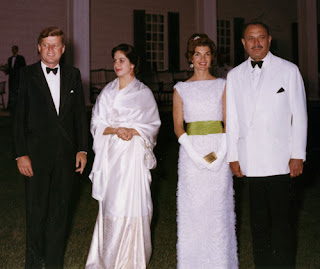 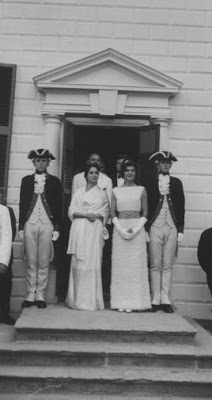 Let's set the Wayback Machine for July, 1961 and join the Kennedys for one of their earliest official entertainments. It isn't being held in the White House be 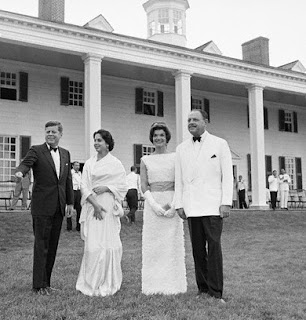 cause the First Couple wants to highlight America's pride in our history. Instead the location is Mount Vernon, the home of George Washington.

Pakistani President Mohammed Ayeb Khan and his daughter, Begum Nasir Akhtar Aurangzeb, join the President and First Lady for a revolutionary war re-enactment,* followed by mint juleps on the lawn. Then they all retired inside for the state dinner, which is a good thing, as the mosquitoes were particularly tenacious that humid summer night.

PS Just to be clear, this was a formal state dinner, with the re-enactment treated as entertainment, just as when the Kennedys invited Pablo Casals to play or the Obamas presented an all-star jazz combo. The top photo and the one on the right are the military demonstration. The other two photos are of the two couples posing for official photos and waiting for their pre-dinner mint juleps on the lawn.

I think this idea completely rocked, I don't know why no First Couple has done it before or since, and it's an elegant way to honor George Washington on the 4th of July.


*The soldiers fired blanks not at "the red coats" but at the Washington press corps., who thought it was funny. The media let JFK get away with things his successors could only dream of.
Posted by The Gal Herself at 7/03/2011 11:55:00 PM