The nominations will be announced later this month, and so I'm working myself up into a frothy Oscar lather. Let me share some of the soap bubbles with you. 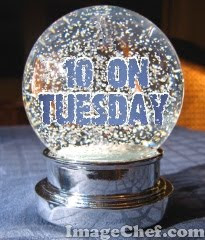